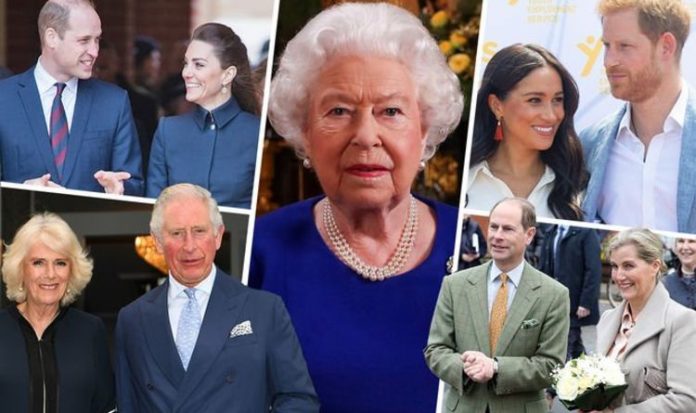 Prime Minister Boris Johnson recently introduced the Rule of Six, which prohibits social gatherings larger than six people across England. Like every family in England, the Queen will also only have a limited number of people at her Christmas dinner table this year should the rule remain in place for December.

Mr Johnson said in his address to the nation on Tuesday evening that “there are unquestionably difficult months to come” due to the ongoing pandemic.

The PM has also stated the current restrictions could remain in place for at least six months, potentially becoming more strict if lockdown rules continue to be broken.

The rule of six will undoubtedly affect a number of large families this Christmas should it remain in place, and the Royal Family will be no exception to this rule.

The Royal Family often gather at the Queen’s Norfolk residence, Sandringham, for the festive period.

And despite being three months away, it already seems as though coronavirus is impacting on the Royal Family’s Christmas plans.

Famously the royals walk to the nearby church, St Mary Magdalene Church, on Christmas Day morning.

Every year the royals are greeted there by members of the public, but this year the coronavirus pandemic makes it unlikely the traditional church visit will go ahead as usual.

A royal source told the Mail on Sunday: “Any sort of church attendance on Christmas Day is highly unlikely under the current guidelines.

The Queen’s beloved husband, Prince Philip, will most likely be spending the festive period by his wife’s side.

As a duo, the Queen and Philip will only be able to be joined by four other members of the Royal Family – and they have plenty of family members to choose from.

The Queen may opt to invite Prince Charles and his wife Camilla, Duchess of Cornwall, as her eldest son and heir to the throne.

She may also decide to be joined by one of her other children, such as Princess Anne and her husband Sir Timothy Laurence.

Prince Andrew could join the Queen, but his daughters Princess Beatrice and Princess Eugenie would be unable to attend with their husbands as well without breaking the six-person limit.

The Queen is known to have a close relationship with her son Prince Edward and his wife Sophie, Countess of Wessex.

As a family of four, the Wessexes would be allowed to visit the Queen and Prince Philip for Christmas.

The Queen may also have hoped to see her grandson Prince William this year.

But the Cambridge family would not be able to visit under the current rules as they are a family of five with Prince George, Princess Charlotte and Prince Louis, along with William and his wife Kate, Duchess of Cambridge.

To see her other grandson, Prince Harry, there are even further complications as Harry is currently living in the US.

There are restrictions on non-essential travel to the UK from the US, and Harry and his wife Meghan Markle, have not been able to visit the Royal Family with their son Archie for months due to the global lockdown.