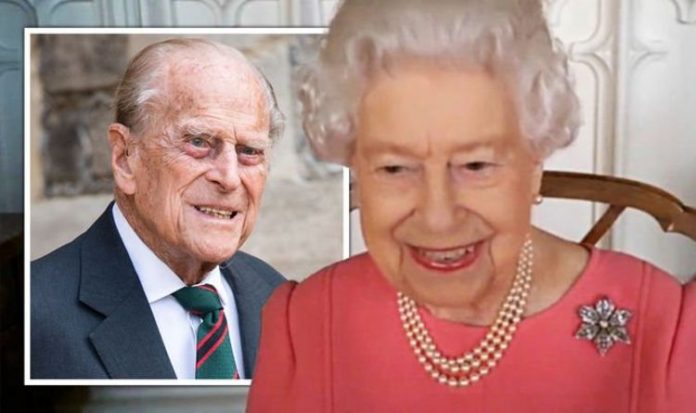 The Queen, 94, participated in a video call with health leaders on Tuesday night, where she discussed the pandemic and made a historic intervention in the COVID-19 vaccination drive. But her comments on the jab weren’t the only thing that stood out, as the monarch wore a stunning brooch that has a particularly special significance.

The Queen wore a salmon pink structured dress for the call and accessorised the outfit with her statement pearl earrings and necklace, as well as the Diamond Clematis brooch.

The brooch, which comprises six petals and a stunning array of diamonds, is the same one she wore for when the future-Queen announced her engagement to Prince Philip in 1947.

She was gifted the item of jewellery just weeks before to mark her 21st birthday.

The monarch’s decision to wear the brooch has been seen as a touching tribute to her husband, who is currently spending his 12th day in hospital.

The Duke of Edinburgh, 99, was first admitted to King Edward VII hospital on Tuesday evening last week after feeling unwell.

It was not an emergency admission and Philip was able to walk in unaided, according to royal insiders.

In an update released on Tuesday afternoon, Buckingham Palace said: “The Duke of Edinburgh remains at King Edward VII’s Hospital where he is receiving medical attention for an infection.

JUST IN: Meghan and Harry ‘blocked’ from returning to UK as Queen stalls plans

Last night Buckingham Palace released the video of the Queen chatting to health leaders responsible for delivering the vaccine across the four nations.

The monarch, who was inoculated in January, urged people who are unsure about taking the jab to “think about other people rather than themselves”.

Asked about her experience, the head of state chuckled as she replied: “Well, as far as I can make out it was quite harmless.

“It was very quick, and I’ve had lots of letters from people who’ve been very surprised by how easy it was to get the vaccine.

Dr Emily Lawson, who is leading the vaccine deployment programme for NHS England, told the Queen: “We hope everyone who is offered the vaccine will take it up, because it is … all of our best chances to protect both the people who take up the vaccine, their families and their communities.”

The Queen said: “Once you’ve had the vaccine you have a feeling of, you know, you’re protected, which is I think very important.

“I think the other thing is, that it is obviously difficult for people if they’ve never had a vaccine…but they ought to think about other people rather than themselves.”

She added: “I think it is remarkable how quickly the whole thing has been done and so many people have had the vaccine already.”