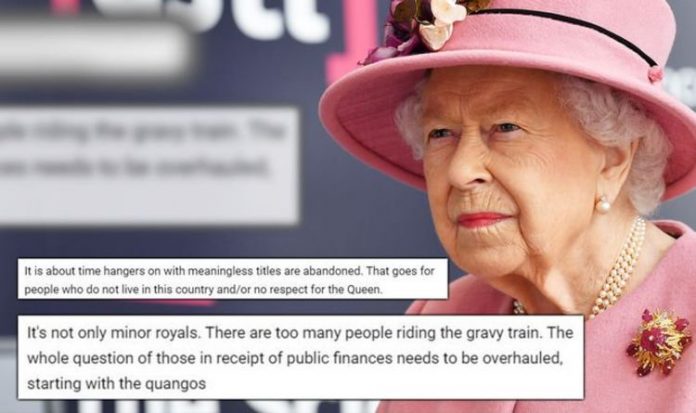 An exclusive poll conducted by Express.co.uk found nine in 10 people would like to see some members of the Royal Family denied taxpayers’ cash. The findings come after royal author Clive Irving, warned a major “trimming down” is on the horizon due to members of the Firm taking cash and giving little in return.

He told Today Extra: “While the whole opera of the Royal Family is a great attraction, it’s outlived its time in terms of its grander purpose.

“What will have to happen eventually and maybe not too far away is a great trimming down of it.”

A staggering 92 percent (1,916) of Express.co.uk readers who took part in the poll said the Queen, 94, should conduct a shake-up of the system.

Only eight percent (150) of respondents said she should not strip minor royals of public money.

Fifteen people (less than one percent) said they didn’t know.

Prince Charles has long backed the idea of a slimmed down monarch.

The proposal would mean that the focus would be firmly directed towards Charles, when he is King, and the Duke and Duchess of Cambridge and their three children.

A second reader said: “There are far too many living in grace and favour properties, paying peppercorn rents for my liking, some the nation never see or know about.”

And yet a third person backed the idea of a smaller monarchy.

They said: “Absolutely, make them earn a living like everyone else has to and make them pay rent too, to the government.”

Another said any member of the Firm who has “proven that their life choices are not conducive to the royal role” should definitely be booted out.

Others said a new system was long overdue, saying: “It is about time hangers-on with meaningless titles are abandoned.

“That goes for people who do not live in this country and/or no respect for the Queen.”

Paul Burrell, Princess Diana’s former butler, has in the past spoken of the heir to the throne’s plans.

He told Us Weekly that Charles, 72, “has made it quite clear that he intends to slim down the monarchy and reduce the number of full-time working members of the family to those in the immediate line of succession.”