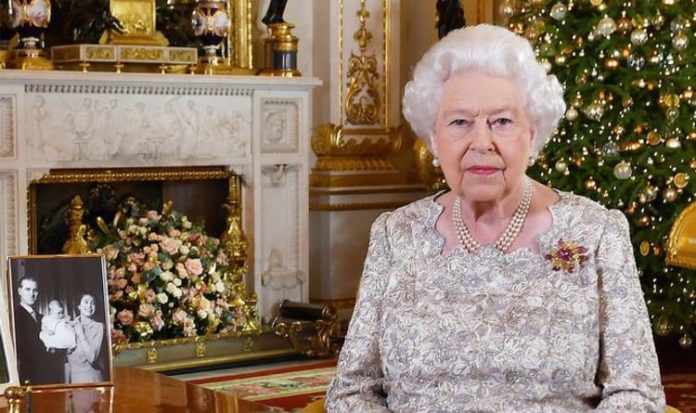 The Queen reportedly delayed the recording of her Christmas speech — which will air on December 25 — as developments with the Brexit negotiations and the pandemic continue to unravel. The Queen has delivered this annual address to the nation for the majority of her reign, but this year she has defied expectations by providing greater support for the country. She gave a surprise speech during the first lockdown to acknowledge the pandemic while boosting public morale and promising “we will meet again”.

The sovereign then spoke again in May to recognise the 75th anniversary of VE Day in an emotional tribute.

Her Christmas speech is expected to focus on the unprecedented challenges which the UK has dealt with over the last year, and commentators predict she will attempt to inject some optimism into an otherwise bleak time for Britons.

As it has been such an exceptional year, independent tax adviser David Lesperance also recommended that the monarch present a financial gift to the public through her speech, especially as a period of economic hardship is on the horizon.

He told Express.co.uk that she should make a “gesture of goodwill to the British people” by providing a lump sum to the public on Christmas Day.

He explained: “The advantage of that is it will reduce the amount of cash for this year but it doesn’t reduce the asset base to generate money.”

Mr Lesperance, from Lesperance & Associates, explained that as Britain heads for recession, the Government could be looking to cut the Sovereign Grant or increase the Queen’s taxes.

He suggested that providing a lump sum to the public purse would be a good alternative.

He added: “If I were the Queen, I would sell it as, ‘Let’s not wait until I die — I want something in the hands of the UK people this year’.”

Speaking during an exclusive interview, Mr Lesperance noted that her Christmas speech would be the most powerful time to do this.

“And that’s what her speech is every year.”

However, the Queen only pays a small amount of inheritance tax.

The Memorandum of Understanding on Royal Taxation reads: “Some assets are held by the Queen as Sovereign rather than as a private individual.

“They are not sold to provide income or capital for the personal use of The Queen and pass from one Sovereign to the next.”

This includes the official residences, the Royal Archives, the Royal Collection of paintings and other art, which the Memorandum claims “would clearly be inappropriate for inheritance tax to be paid in respect of such assets”.

Additionally, inheritance tax will not be paid on gifts or bequests which pass from one monarch to the next, or from a former sovereign’s consort to the succeeding monarch.

However, it will be “payable on gifts and bequests to anyone else”.

It explained: “The monarchy as an institution needs sufficient private resources to enable it to continue to perform its traditional role in national life and to have a degree of financial independence from the Government of the day.”

Therefore, the total amount of inheritance tax the Queen would have to pay is small — but, it could mean Mr Lesperance’s suggestion is that much more feasible.