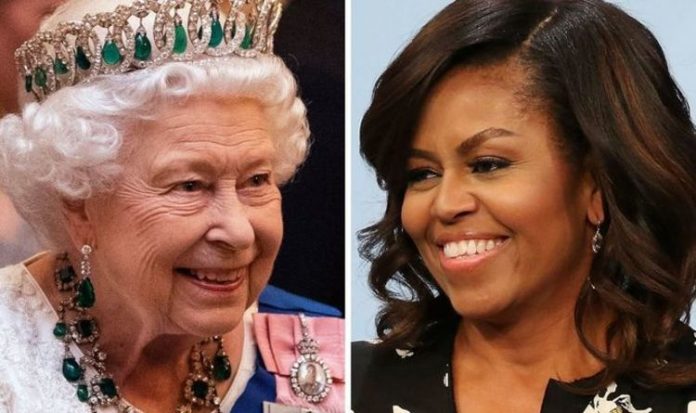 Michelle helped change the course of American history after her husband Barack was elected as the first black US President. Throughout their eight years in the White House, they managed to implement a progressive agenda, including the introduction of Obamacare. They have since secured their legacy, by signing a multi-million pound content deal with Netflix, to produce documentaries on a variety of topics.

But while Michelle was First Lady of the United States, she rocked the world after appearing to break royal protocol by touching the Queen during a visit to Buckingham Palace in 2009.

The Queen, however, returned the compliment by wrapping her own arm around Michelle in a display of affection for Barack’s wife.

For many the moment was symbolic, including Whoopi who said the gesture was the “most marvellous thing I have seen”.

Speaking on 2020’s Amazon Prime documentary Michelle Obama: After the White House, the iconic actress said Her Majesty probably felt “she never thought she would see this”, referring to the US electing a black President.

Michelle Obama and the Queen touch one another in heartwarming moment (Image: BBC)

She continued: “I loved it. I know people got crazy. She’s touched the Queen! You know, but she didn’t melt. She didn’t disappear.

“So I figured protocol does not change, but every now and then I think something happens where she goes, ‘I’m going to mark this occasion… and nobody will ever forget this.’

“I just wanted to tip my dread[locks] to her. I just thought it was the most marvellous thing I have seen.”

JUST IN: Michelle Obama heard ‘yelling’ and ‘pushing’ Barack to stop his hugs

The encounter came as delegates visited the Palace as part of a G20 summit.

Michelle’s move didn’t break any legal rules, but it is widely accepted that people should not touch a member of the Royal Family, unless they start contact.

Reflecting on the moment in his 2020 autobiography, A Promised Land, Barack said the Queen “didn’t seem to mind” when Michelle touched her.

Michelle Obama alongside the Queen and their husbands (Image: GETTY)

Michelle herself discussed the moment in her own autobiography, 2017’s Becoming, where she detailed how they bonded over fashion.

She wrote: “The Queen glanced down at the pair of black Jimmy Choos I was wearing. She shook her head. ‘These shoes are unpleasant, are they not?’ she said.

“She gestured with some frustration at her own black pumps. I confessed then to the Queen that my feet were hurting. She confessed that hers hurt, too.

“We looked at each other then with identical expressions, like, when is all this standing around with world leaders going to finally wrap up? And with this, she busted out with a fully charming laugh.”

Journalist Ashley Pearson told Amazon Prime that the incident showed off Michelle’s “warm side”, but admitted that “everyone was shocked” at what she had done.

She said it caused “gasps” that echoed around the world, despite the pair seemingly content in one another’s company.

Even the Queen herself was happy at the meeting and not uncomfortable, Her Majesty’s longterm dressmaker and friend Angela Kelly said.

Ms Kelly admitted the Queen “has the ability to make everyone feel so relaxed” that on occasion it “feels instinctive to be tactile with her”.

The author of 2019’s The Other Side of the Coin: The Queen, the Dresser and the Wardrobe wrote: “In reality it was a natural instinct for the Queen to show affection and respect for another great woman and really there is no protocol that must be adhered to.

“When fondness is felt or the host of a state visit goes to guide Her Majesty up some steps, it truly is about human kindness and this is something the Queen will always welcome warmly.”