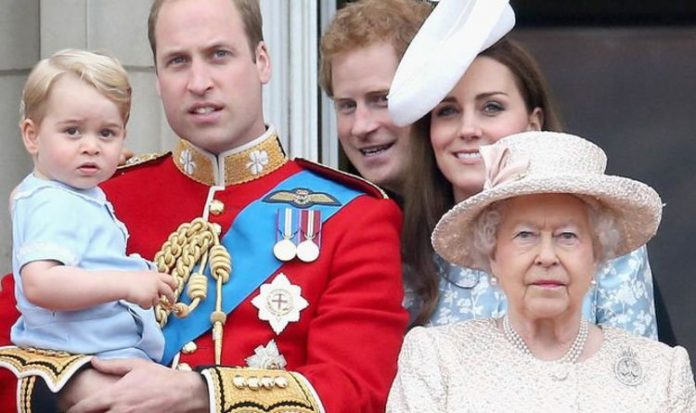 The Queen was appalled to see Prince William was allowed to “fight, cry and run” around the house despite being second-in-line to the throne, according to royal author Robert Lacey. The expert claimed the monarch was particularly appalled to hear the future Duke of Cambridge fantasising about rules and reforms he would carry out as a king.

Mr Lacey wrote on his upcoming book Battle of Brothers: “Her Majesty was not impressed by her grandson’s noisiness, which got worse as Harry became old enough to join in – with fighting, crying and boisterous running around whenever they came to stay at Windsor, Sandringham or Balmoral.

“It was poor behaviour that she did no expect of her grandchildren.

“Elizabeth II made some enquiries and was particularly horrified to learn that one of William’s favourite lines ran ‘When I am king, I’m going to make a new rule that…'”

Mr Lacey went on saying the monarch discussed the matter directly with her own son, Prince Charles.

The Queen was ‘not impressed’ by the behaviour of Prince William in his early years (Image: GETTY)

Prince William with his parents Charles and Diana (Image: GETTY)

The Queen told the Prince of Wales, according to the royal author: “You really must do something, Charles.

“The boy needs discipline. Perhaps a new nanny is in order”.

At the time, Prince William and Prince Harry’s nanny was Barbara Barnes, to whom the royal children grew so attached it sparked the jealousy of Princess Diana, according to the royal expert.

READ MORE: William ‘could not comprehend’ Harry’s snub to tradition

In his book, Mr Lacey detailed the upbringing of the main characters of what he has described as a battle within the House of Windsor – Prince Harry, Prince William and their wives.

The author described Prince Charles and Princess Diana as lenient and indulgent parents, so in awe, with their sons, they were willing to close an eye on their cheekiness.

Prince William used to have lunch at Windsor with the Queen and Prince Philip while at Eton (Image: GETTY)

Prince Charles and Princess Diana are said to have been indulgent parents (Image: GETTY)

Aged three, William’s behaviour was still so impressive he had gained a series of nicknames the Queen would unlikely find pleasing, according to Mr Lacey.

He wrote: “The young prince had picked up his nicknames of ‘Basher Wills’ or ‘Billy the Basher’ when he joined Mrs Jane Mynors’ Nursery School in Notting Hill, not far from Kensington Palace, in September 1985.

“Noisy, cheeky and defiant of discipline, Wills soon angered his classmates by pushing his way to the front of the dinner queue and getting involved in playground fights.”

Charles and Diana’s eldest son became quieter while growing up, Mr Lacey wrote in his book, while his bond with the monarch became stronger.

While at Eton, the Duke of Cambridge started to visit the Queen and Prince Philip for lunch every few Sundays.

This tradition started out of concern for Prince William’s wellbeing after the crumbling marriage of his parents had become a very public affair.

Explaining how Prince Philip pushed the Queen to act in order to support the young prince, Mr Lacey wrote: “The Duke of Edinburgh intervened.

“Philip shared his wife’s concerns and he suggested that she overcome her longstanding aversion to involvement in messy family matters by trying to get closer to this particular boy – who was not just her grandson, but a future inheritor of her crown.

The Queen was not happy with Prince William and Prince Harry running, crying and fighting in her households, according to a royal expert (Image: GETTY)

“Perhaps the lad could come up and join them both in the castle from time to time on a Sunday, when the Eton boys were allowed out into the town?

“And so the lunches had begun.”

Describing the lunches, which contributed to strengthening the bond between the young heir and the monarch, Mr Lacey said: “Pudding ended, Philip would make a discreet exit, leaving his wife and grandson together in the panelled Oak Room with its six-arm chandelier hanging over the table in front of Queen Victoria’s beautiful Gobelins tapestry of The Hunt.