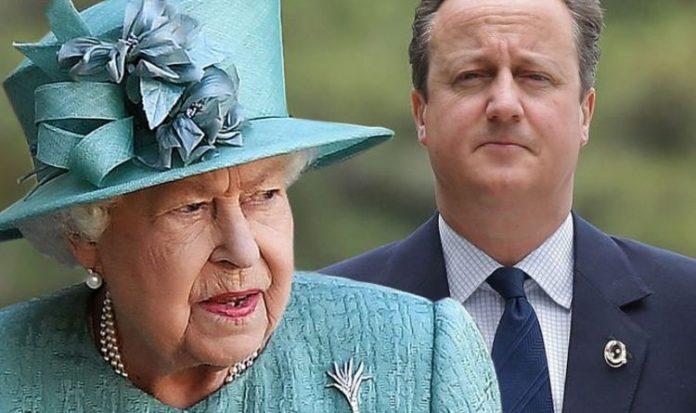 In a devastating confession, Mr Cameron not only risked the ire of senior figures within the Royal Family, but he also enraged those wedged within the bitter political debate surrounding Scotland’s decision to remain as a member of the UK. After insisting that he went to Her Majesty, known for her position of being unable to comment on political matters, for help over the referendum four years ago, a catalogue of figures within the Scottish independence team queued up to take aim at the ex-Conservative leader. Jonny Dymond, royal correspondent at the BBC, likened Mr Cameron’s comments to the cult Nineties film ‘Fight Club’, where the “first rule is that you do not talk about Fight Club”.

He explained this mantra was similar to the discussions between the Queen and Prime Minister where “you never, ever talk about the relationship” they have had, following last year’s remarks.

Insiders at Buckingham Palace exposed the “displeasure” felt by Her Majesty after Mr Cameron’s comments to the BBC.

Mr Dymond added: “You can probably read that as cold fury. Not just because he has broken the first rule. But because he has made it painfully clear that in 2014 he used the Queen for his own political purposes. And that she and her advisors thought that was OK.

“The revelation comes as her suspension of Parliament – a suspension made on the effective instruction of Boris Johnson – comes under unprecedented scrutiny in the Supreme Court.

“The two cases are very different, but they both highlight the dark greys of the Queen’s constitutional position, the discretion she has or lacks, under extraordinary circumstances, to speak out and act.”

The incident in question is related to Mr Cameron’s apparent asking of the Queen to “raise an eyebrow” regarding Scotland’s possible move to leave the UK and become an independent nation.

In a later address, the Queen told those voting in the 2014 referendum to “think carefully about the future”.

Mr Dymond’s comments were made after a documentary was released in 2019 where Mr Cameron’s remarks were aired.

The row over Scottish independence has continued on, despite supporters of Scotland’s decision to remain pointing out the referendum was a “once-in-a-lifetime vote” that should not be repeated in the near future.

Critics claim as a result of the UK’s decision to leave the EU, enough has substantially changed for people in Scotland to make a new decision on their status.

But following the comments, the likes of Alex Salmond – who was the country’s First Minister and driving force behind the referendum in 2014 – said: “David Cameron was clearly trying to mobilise the Queen to help his political interest and that’s not just completely improper, it’s quite extraordinary that he should reveal it and boast about it.

“I’m not surprised that the Palace appears to be extremely displeased with the former Prime Minister.”

DON’T MISS:
There’s no amnesia like that of former PM – look at THERESA MAY [COMMENT]
Labour: Ed Miliband and Alastair Campbell in BITTER exchange  [ANALYSIS]
Embarrassed Cameron dismisses lewd joke about ‘giving one’ to woman [UPDATE]

Defending himself, Mr Cameron argued he was looking to give an “honest explanation” about his time as Prime Minister.

His comments were during the BBC documentary The Cameron Years, and after its release, the ex-MP added: “We have to set the context – at the time Mr Salmond was saying that the Queen would be a proud monarch of an independent Scotland and there was frustration around that and that was being put and nothing else was.”

Calls for Scotland to leave the UK are continuing to grow, with current First Minister, and leader of the Scottish National Party, Nicola Sturgeon, amongst the major figures hoping for a second referendum.

She added: “I think the revelations – if I can call them that – from David Cameron say more about him than they do about anybody else, and really demonstrate the panic that was in the heart of the UK Government in the run-up to the independence referendum.”