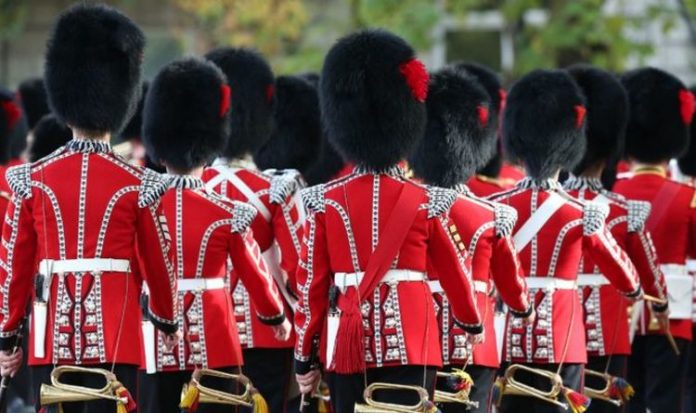 The pair were arrested on Thursday after Met Police officers raided two addresses in Berkshire. The operation was supported by the Royal Military Police and Ministry of Defence Police.

A Scotland Yard spokesman said: “Two serving members of the British Army have been arrested on suspicion of firearms offences.

“They have been taken to a nearby police station where they remain in custody.”

An MoD spokesman said: “We can confirm that two soldiers have been arrested on suspicion of firearms offences.

“We are assisting the Metropolitan Police with their investigation.”

The Coldstream Guards is the oldest continuously serving regiment in the British Army.

As well as ceremonial duties, it is an infantry unit specialising in light role operations.

The Army’s website says: “As the oldest continuously serving regiment in the British Army, the Coldstream Guards is well known for its high-profile ceremonial duties – but it’s an infantry unit first and foremost, with a hard-won reputation as an elite fighting force.”

The Coldsteam Guards was formed under the command of George Monck in 1650.

The Army’s website adds: “Since then, it has answered the call of duty at almost every conflict with British involvement, earning a well-deserved reputation for loyalty and courage.”