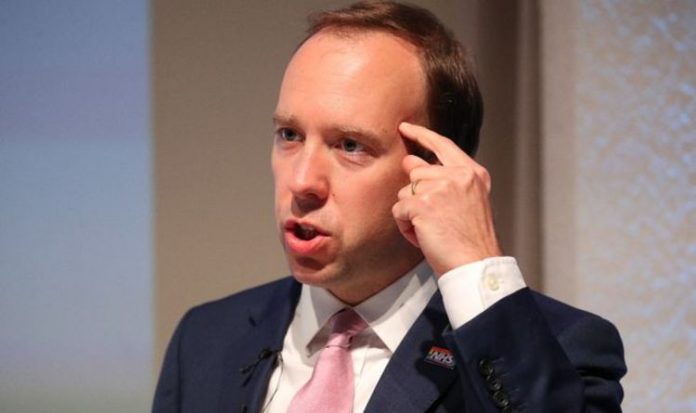 The Health Secretary said yesterday that officials were working to make it the norm for people to be regularly checked for coronavirus. Advocates of routine testing say it will give the public confidence and freedom to return to offices, shops and other crowded venues. Mr Hancock said: “This is a really, really important drive that we have across Government to bring in mass testing, population-wide testing.”

He did not put a date on when mass testing would be available or what form the tests would take. It is thought they may involve fast checks on saliva for Covid-19 rather than throat or nose swabs.

Mr Hancock said: “The new technologies for testing that are coming on stream now are incredibly important.

“At the moment you have to send off a test to a laboratory and get it back and all the logistics of that takes time, it’s also quite expensive.

“We’re testing some of these [new methods] right now in Porton Down, in our scientific labs.

“The mass testing, population testing, where we make it the norm that people get tested regularly, allowing us therefore to allow some of the freedoms back, is a huge project in Government right now with enormous support.”

Former prime minister Tony Blair is among those who have called for mass testing to be urgently introduced. He warned that the Government was “running out of time” ahead of a possible second wave of coronavirus that could wreak enormous economic damage.

Pressed on the timeline, Mr Hancock declined to say when mass testing might be available.

He told BBC Radio 4’s Today programme: “We’re ramping it up over the remainder of this year. I’m not going to put a firm deadline on it.

“The answer is we’re working as fast as we can. This moonshot to have testing ubiquitous and available to reopen all sorts of things, to reduce the burden of the quarantine arrangements, which nobody wants to have in place, to allow us to reopen parts of the economy, that is an incredibly important project within Government right now.”

A further 812 cases of coronavirus were confirmed in the UK yesterday along with a further 16 deaths of people who had tested positive within the 28 days before.

The announcement of mass testing came as it was revealed a separate, major study will be scaled up to include 150,000 people by October.

READ  Brexit news: Theresa May not to betray Brexit ahead of Chequers showdown | Politics | News - UK

Currently, 28,000 volunteers are tested in England and Wales once a fortnight by the Office for National Statistics’ Covid-19 Infection Survey. This monitors levels of infection to pinpoint where outbreaks may be occurring. The eventual aim is to test 400,000 people, including in Scotland and Northern Ireland.

It is thought the cost over the next two years will be £750million.

The Department of Health and Social Care said yesterday: “The expanded study will provide extensive, weekly data on the spread of infection, supporting rapid testing and diagnosis of Covid-19 both nationally and in areas of concern.

“Letters have already been sent out to tens of thousands of homes inviting people to take part in the survey.

“Anyone who receives a letter asking them to participate in the study is encouraged to do so.”

Participants are given swab tests and some are also asked for blood samples to check for antibodies.

Professor Sir Ian Diamond, UK National Statistician, said: “The extra data on the spread of infections and antibodies at local level will be invaluable to the planning of effective local responses.

“If you’ve been approached to take part then please do so.

“You will be helping us all to contain this terrible virus and get on with our lives.”

Prof Sarah Walker, chief investigator from the University of Oxford, said: “The point of the scale-up is that if we have a problem in October, we are not caught unawares at either a national or local level [in winter].” The Government also announced a £2million grant to support the ZOE Covid-19 Symptom Study app. Data logged by users is being used by King’s College London to identify high-risk groups and places. Separately, Public Health England is working on a study to solve the mystery of whether people can be infected twice.

It has recruited 10,000 NHS workers in England, who will provide regular blood and swab tests over 12 months to see if those with antibodies have lasting immunity. Preliminary results are expected before winter.

Professor Susan Hopkins, from Public Health England, said: “Every day we learn more and more about the impacts of becoming infected with Covid-19, but we don’t know if you can get it again, if you can pass it on, or if you develop immunity.

“We urgently need to find out the answers to these questions.”