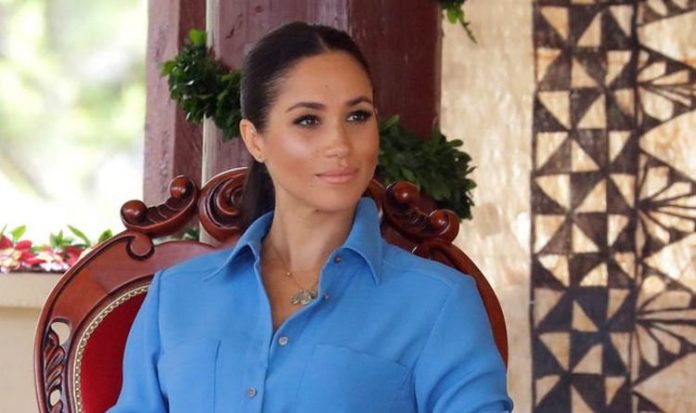 Meghan is teaming up with Mrs Obama’s voter registration group, it has been announced. The Duchess of Sussex is set to take part in the ‘Virtual Voter Registration #CouchParty’ tonight.

Her presence at the virtual event was announced yesterday, with Meghan being introduced among other guests as ‘Meghan, The Duchess of Sussex’.

The use of her title appears to have upset a few royal fans, who noted members of the Royal Family usually abstain from speaking about political topics to be as neutral as possible.

Twitter user Ms Donna wrote: “She wants to delve into American politics she should give up her royal titles, tell Harry’s daddy they don’t need his money anymore and Harry and his son should abdicate from the line of succession.”

This user followed up on her thoughts in another tweet, reading: “But as an American, she shouldn’t be voting w/ a royal title.

Meghan Markle joined the Royal Family in May 2018 (Image: GETTY)

“It’s not rocket science. She can be Meghan Mountbatten-Windsor.”

Kay added: “Why still this American that wants to vote is still clinging and using a royal title?”

Social media user Chelsea said: “‘Who needs a tiara?’ Idk, but she sure clings to that title.”

This Twitter user, who appears to be a US voter, expressed in another tweet why the use of the title left her baffled.

She said: “Y’all, we haven’t cared about British royalty for nearly 250 years.

READ MORE: Meghan Markle and Harry ‘struggle’ to pay back taxpayers for Frogmore

“Good for her, but her title means absolutely nothing on this side of the pond.

Meghan acquired her royal title on May 19 2018, upon marrying Prince Harry.

The Duke and Duchess still retain their full titles despite having stepped down as senior royals to become financially independent and live abroad.

Meghan Markle explained why she votes in a recent statement (Image: GETTY)

However, in accordance with the deal struck with the Queen and her aides in January, the couple can no longer use their titles in full, which means they are barred from styling themselves as HRH – His/Her Royal Highness.

By stepping down as full-time working royals, Meghan and Harry have gained more freedom to pursue initiatives close to their heart – including American politics.

The All Women Vote featuring Meghan will mark the 100th anniversary of the ratification of the 19th Amendment to the US constitution.

This key amendment finally gave the right to vote to all American women.

Speaking about the event and what it hopes to achieve, organisers When We All Vote said: “Our speakers all share our passion for every woman being able to make her voice heard in our elections, and we know they will get our volunteers fired up to join our mission of increasing participation in every election.”

This is not the first time Meghan has delved into politically-charged issues.

Prince Harry remains sixth in line to the throne despite Megxit (Image: EXPRESS)

In 2016, ahead of the election of Donald Trump, the then-Suits actress branded the property tycoon “divisive and misogynistic”.

Earlier this month, Meghan has also suggested she will vote in the 2020 US election, taking place on November 3.

“One of my favourite quotes, and one that my husband and I have referred to often, is from Kate Sheppard, a leader in the suffragist movement in New Zealand, who said ‘Do not think your single vote does not matter much.

“‘The rain that refreshes the parched ground is made up of single drops.’

While the Duchess of Sussex doesn’t explicitly say she will cast the ballot in November this year, the fact that Meghan was included in a list titled “100 Influential Women on Why They’re Voting in the 2020 Election” heavily suggests she will vote in the upcoming US election.