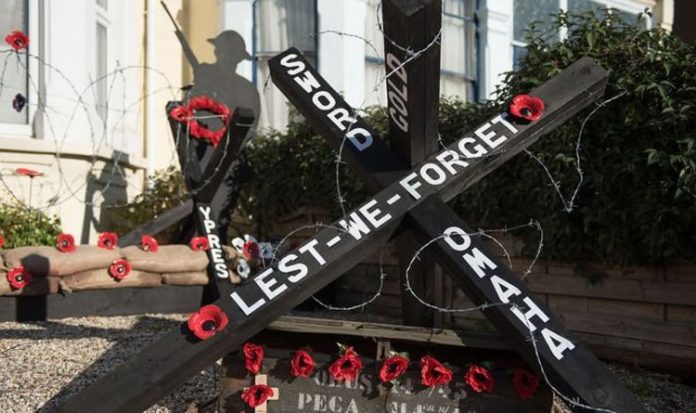 Colonel Richard Kemp has hit out at the restrictions this Sunday as he noted that the public honoured the war dead during the Spanish flu which ended in 1920. The ex-Commander of British Forces in Afghanistan explained the country was suffering from a “far greater contagion” then. The Government’s ban on communal worship during the second lockdown in England means church services marking Remembrance Sunday have had to be cancelled.

READ MORE: How to Celebrate Remembrance Day from lockdown

Speaking to Express.co.uk, Colonel Kemp said: “At this time of year it is so important we remember our war dead because we wouldn’t be able to live our lives the way we do had they not made the enormous sacrifice, giving everything they had and everything they could have had in order for us to live in freedom and prosperity.

“I think the fact that the additional restrictions caused by coronavirus are obviously problematic but should not stop us from honouring them in the way that we’ve been doing since 1919.

“The first Remembrance events occurred in 1919 when this country was suffering from a far greater contagion, the Spanish flu, than today’s coronavirus.

“I think we should take part in the example they set us in whatever way we can safely to commemorate our war dead.”

It comes as a 100-year-old D-Day veteran has urged the public to do their “duty” and follow coronavirus restrictions to protect the NHS.

Major Ted Hunt, who commanded landing craft on to Gold Beach in Normandy in June 1944, called on people to adjust their behaviour to support doctors and nurses.

A former Queen’s Bargemaster, he will be among the many elderly veterans unable to mark Remembrance Sunday in line with usual traditions this weekend, due to the coronavirus lockdown in England, as well as health concerns.

Speaking from his home in Lancing, West Sussex, before the new lockdown came into force, Mr Hunt said: “On Remembrance Day I won’t go anywhere.

“At 100, I’m vulnerable as far as coronavirus is concerned, and with the safety of the nurses and doctors in mind I want to reduce my contact as much as possible.

“So on Remembrance Sunday I’ll be quite happy to be stuck here on my own in front of the television, listening to the mass bands, I hope, and the wonderful music, and I will think not only of my men who died on D-Day morning, I will not only think of my school class… I will think of the civilians.”

Born in Canning Town, east London, in 1920 to a “river family” whose heritage dates back to the 17th century, Mr Hunt was apprenticed as a River Thames waterman and lighterman.

Following the outbreak of the Second World War, he enlisted with the Royal Engineers and served at the Battle of Narvik in Norway.

He later worked in London and East Anglia, preparing defences in case of a German invasion, and by 1944 he was a captain commanding 15 Rhino ferries on D-Day.

He said that in four months, 64 of these landing craft put ashore 93,000 units of tanks, lorries and other vehicles as well as 440,000 tons of military stores.

“Because at 100 I’m more vulnerable (than) most, thinking of the doctors and nurses, I owe it to them to reduce… my increasing the figures and that falls upon me to behave in a certain way,” Mr Hunt said, arguing that restrictions should be “severe”.

Asked what his message to the public would be, he added: “Accept the discipline that is required in you to behave properly, and properly means that you reduce the likelihood of… adding your name to the list of patients to be seen by doctors and nurses.

“That’s our duty. And we should do everything. So I cut my contact with others to a minimum.”