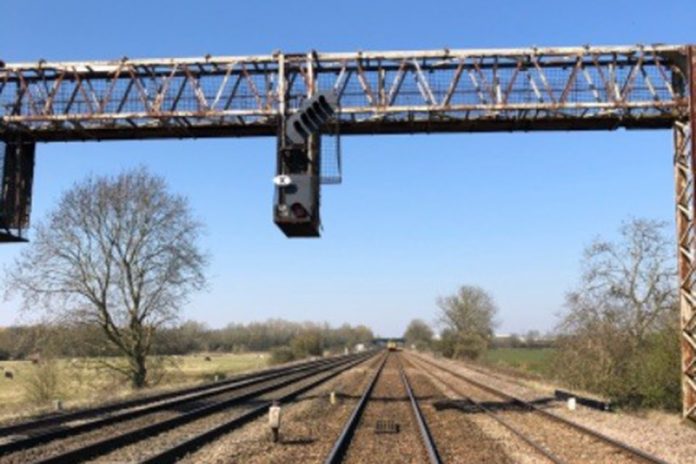 At around 10:57 hrs on 26 March 2020, a train formed of two locomotives and an empty, un-braked, passenger multiple unit passed a signal at danger about 0.75 miles (1.2 km) south of Loughborough station. The train passed the signal at a speed of about 20 mph (32 km/h) and came to a stand around 200 metres beyond it. The signal was at danger to protect the movement of a passenger service which was just about to leave Loughborough station.

The incident occurred because the train was travelling too fast for its braking capability, and because the braking applied by the driver was insufficient to stop the train from that speed within the available distance. Evidence indicates that the train was travelling at a speed of around 75 mph (121 km/h) on the approach to the signal, whereas the maximum permitted speed for the train, which takes into account its braking capability, was 60 mph (97 km/h). The driver stated that he believed that the maximum permitted speed of the train was 75 mph (121 km/h), based on information that had been provided to him on a train planning document. An underlying cause of this incident was that the train operator’s management assurance processes did not detect a lack of compliance with its own safety management system, in areas that resulted in the driver and shunter being inadequately prepared for the movement of the train. RAIB further observed that the driver did not conduct an adequate running brake test at the beginning of the journey, and that the train operator did not adequately manage the retrieval of evidence from the on-train data recorders on the locomotives.

As a result of this investigation, RAIB has made one recommendation for Rail Operations Group to review its management assurance processes relating to operational safety. RAIB also identified two learning points relating to awareness of and adherence to maximum permitted speeds, and the importance of conducting proper running brake tests.

Good safety management is all about making sure that the systems you have set up, and what you have said you will do, are actually happening on the ground. Our investigation of this signal passed at danger found some significant deficiencies in the way that the train operator was managing safety. This led to a train being driven faster than was permitted on the route, and therefore unable to stop before passing a red signal by a significant distance.

Our investigation revealed a gap between documented safety processes, and what was actually happening. Drivers were supposed to be issued with train documents, giving basic information about loads, available brake force and permitted speeds; but this was not happening. There also appeared to be no management awareness of how well, if at all, the company was following its own safety processes, including those related to competence management.

What went wrong is a reminder of how any train operating company, no matter how small, needs to live its safety management system, not just have one ‘sitting on the shelf’. It needs to make a difference to the people who actually plan the work and drive the trains.