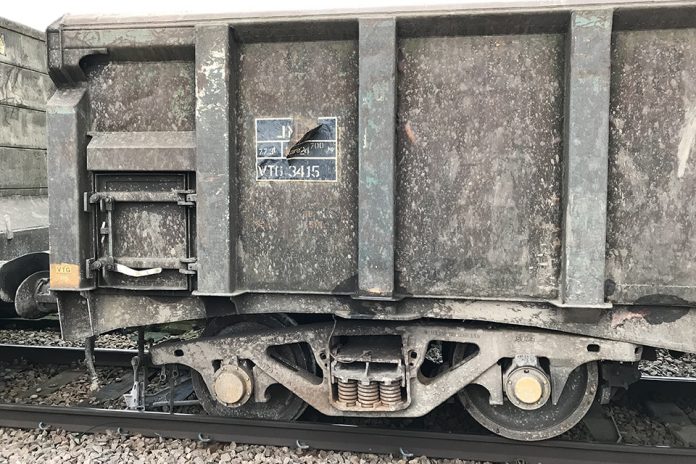 Shortly before 06:00 hrs on Thursday 23 January 2020, a wagon in the rear half of a heavily loaded freight train derailed on a small radius curve as it crossed a bridge in east London. The forces from the train caused the rails on the bridge, which were attached to large longitudinal timbers, to spread apart. Two adjacent wheelsets from different wagons derailed, but one wheelset re-railed itself after travelling a short distance. The other wheelset remained derailed as the train continued for 2.5 miles (4.1 km) before stopping, and this caused significant track damage. Wagons positioned behind the derailed wagons remained on the track.

Track where the rails are supported on longitudinal timbers is subject to special inspections by staff who have received additional training to undertake this role. RAIB found that the condition of the timbers at the point of derailment had severely deteriorated because of rot, but this was concealed by their superficially good exterior condition. The inspection method and tools used by Network Rail staff were not sufficient to detect the poor internal condition of the timber.

The widening of the track gauge was identified, by track recording vehicles operated by Network Rail, six times between March 2019 and January 2020. On three occasions, the track maintenance gangs responded but undertook work in a nearby location due to erroneous GPS data. On three other occasions, the track recording vehicles’ software did not report the location of the fault so maintenance staff remained unaware of it.

One wagon in the train exerted sufficient force on the weakened track support to force the rails apart and cause the wagon to derail. Examination of the first wagon to derail and its maintenance records indicated that it had experienced unusually rapid wheel wear over several years. It is possible that this meant it was imposing higher than normal lateral forces on the track and that this is related to a defect which affected the way the bogie was able to rotate.

RAIB has made one recommendation to Network Rail regarding improvements in the provision of track recording vehicle data to track maintenance staff, and one recommendation to the wagon owner concerning the monitoring of maintenance activities to reduce the risk of defective rail vehicles entering service. It has identified three learning points covering the management of longitudinal timber systems and loading activities in freight loading terminals.