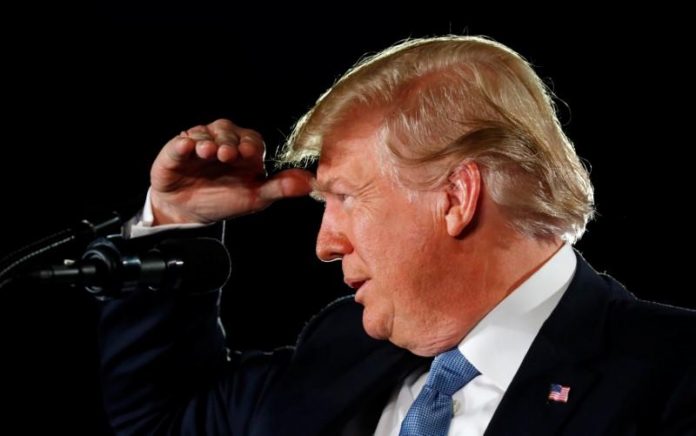 LAS VEGAS (Reuters) – President Donald Trump defended his tough stance on immigrants crossing the U.S. border with Mexico on Saturday, praising his administration for a job well done and saying his approach will make the United States stronger.

Trump also said his peace initiative with North Korea was already paying off despite criticism that his Singapore summit with North Korean leader Kim Jong Un earlier this month was long on positive imagery but short on specific accomplishments.

Trump, who was in Las Vegas to lend support to U.S. Senator Dean Heller of Nevada, a Republican who is facing a stiff challenge to re-election, has been under fire for a policy that separates children from their parents when they illegally cross the U.S. border with Mexico.

Amid a fierce outcry, Trump reversed himself on Wednesday and signed an executive order to abandon the policy, but the fate of more than 2,300 children already separated from their parents before the order was enacted is unknown.

“My people are actually doing a very good job,” Trump said in a speech at the Nevada Republican Party state convention at Suncoast Hotel and Casino in Las Vegas.

Trump said that with a 3.8 percent jobless rate, the United States needs immigrants for jobs that need to be filled, but he wants them to be legal immigrants.

“We need people to come in, but they have to be people that love this country, can love our country and can really help us to make America great again,” he said.

Trump has drawn some criticism from national security analysts for an agreement that emerged from his Singapore summit with Kim that had few details on how Pyongyang would surrender its nuclear weapons and ballistic missiles.

At a roundtable with local business leaders after his speech, Trump said he believes North Korea will engage in “total denuclearization.”

He said the agreement is paying off in terms of the North’s suspension of nuclear weapons tests and missile tests, as well as the planned surrender of the remains of American soldiers killed in the 1950-1953 Korean War and a general lowering of tensions in the region after last year’s sabre-rattling.

Of Kim, he said, “We have a good chemistry together. We get along great. He’s a smart, tough guy. He’s a great negotiator.”

Addressing the Senate race in Nevada, where Democratic U.S. Representative Jacky Rosen is challenging Heller, Trump took aim in his convention speech at a favourite Democratic target, U.S. Senator Elizabeth Warren of Massachusetts, who was campaigning with Rosen elsewhere in the state.

Trump revived a derogatory nickname for Warren, “Pocahontas,” and said he had a nickname for Rosen as well: “Wacky Jacky.”

Rosen fired back quickly, saying on Twitter, “Is that the best you’ve got, @realdonaldtrump? Let’s fight back. Chip in now,” with a link to contribute to her campaign.

Trump and Heller have a rocky past. They clashed in the early months of Trump’s presidency over a proposed healthcare revamp, but now get along well, with both wanting to maintain Republican control over the U.S. Senate in the November congressional elections in which Democrats are projected to make gains.

Republicans now hold a mere one-seat majority in the 100-seat Senate, where one-third of the seats are up for election in November. Heller is considered the most vulnerable Republican running for re-election in the Senate.

Trump on Saturday also defended his proposed tariffs against Chinese products and his threat to impose tariffs against European allies, and said he will raise the issue once again of whether NATO allies are spending enough on defence at a NATO summit in Brussels next month.

“The trade stuff is coming along, just starting. But it’s happening,” Trump said. “We’re a piggy bank that everybody likes to steal from.”