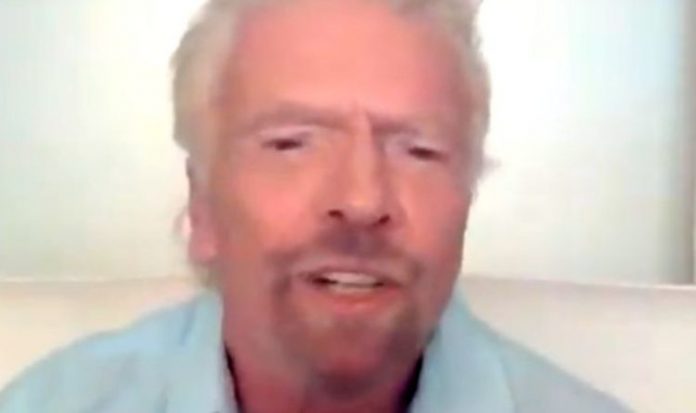 Billionaire Richard Branson has been attacked for calling for an end to travel restrictions during an interview on Sky News. Following the interview, news host Mark Austin told his coworker and fellow host Jon Craig Mr Branson was insisting restrictions should be relaxed once the most vulnerable have been vaccinated. Mr Craig smiled and mocked the businessman by saying “well he would say that” and highlighted Mr Branson was connected from his private island.

Mr Austin said: “The success of the coronavirus vaccine will inevitably bring questions about when restrictions can be lifted.

“It was interesting Sarah Hewson was talking to Richard Branson this afternoon.

“He was saying once the vulnerable, the most vulnerable have been vaccinated, then is the time to start opening things up to airlines and other businesses.

“It will be interesting to see if the Government thinks that way.

While smiling Mr Craig said: “I am tempted to say he would say that, he is an airline boss.

“I did notice that he was speaking from his island of Necker in the Caribbean.”

Mr Craig did admit the airline industry had taken a significant hit due to the global coronavirus restrictions.

He added: “Yes, the airline industry has been absolutely hit for six after that travel ban announced towards the end of last week.

“The other big travel story is Eurostar saying it is going to go bust in April if things don’t improve.

“The travel restrictions are a big factor for the Transport Secretary Grant Shapps.

“He has got an aviation sector that is in a terrible position and Eurostar saying they are going to go bust.