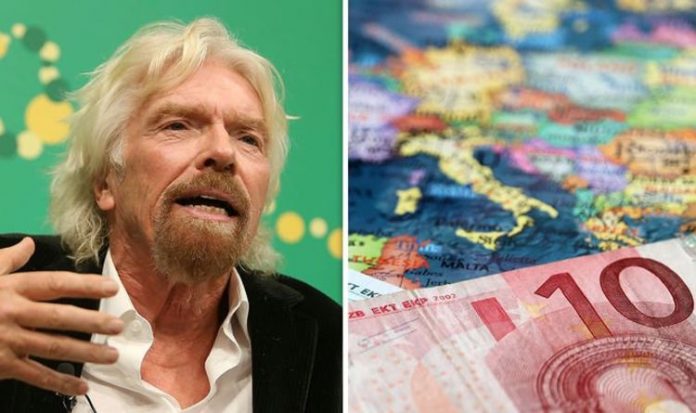 Richard Branson discusses ‘taking risks’ in his career in 2018

The eurozone is on course for a double-dip recession after the second wave of COVID-19 infections during the last quarter of 2020 sent the recovery into reverse. As a result of national governments introducing new restrictions and lockdowns to try to curb the spread of the virus, the eurozone’s GDP fell by 0.7 percent from October to December. With lockdowns likely to persist through much of the first quarter of the year and the EU’s sluggish start of its vaccine rollout programme, analysts believe the bloc will almost certainly suffer a second bout of declining economic activity from January to March.

A recession is defined as at least two consecutive quarters of negative growth.

Moreover, the euro tumbled to a nine-month low against the pound in response to the figures and the prospect of a double-dip recession.

On the other hand, sterling rose to €1.1365 for the first time since last May, meaning one euro is worth 88 pence.

As many wonder whether the gloomy forecast could mean the end of the eurozone, an interview with English business magnate Sir Richard has resurfaced.

As European finance ministers battled to stop Greece crashing out of the euro in 2015, Sir Richard claimed British exports to the continent would have been much stronger had Britain ditched the pound.

He also warned leaving the European Union would have been “catastrophic”.

Asked if he was pleased Britain was staying out of the single currency, he told BBC One’s Andrew Marr: “Not particularly, I think that if we were part of the euro right now our currency would be a lot cheaper, Great Britain would be doing that much better in trading in Europe because the pound is a lot stronger than the euro, it makes it more difficult for us.

He added: “I’m very happy just to say why we should be proud of being Europeans.

“Each European country is trying to improve Europe, that’s much better to do from within Europe than from [outside it].”

Richard Branson claimed UK would be better off with euro: ‘Pound makes it difficult!’ (Image: GETTY)

Sir Richard had been tipped as a frontman for the Yes campaign, as one of the most high profile pro-European businessmen in the UK.

But he continued: “I doubt I’ll be taking a lead role. I mean all I can do is do the occasional interview.

He added: “The wonderful situation we have at the moment where there’s this enormous trading bloc, you can treat it just as if it’s the UK.

“Trade anywhere within Europe and so how anybody would want to go back to the days where all these barriers were put up, I just find it inconceivable.”

Sir Richard also argued that “the whole of the EU administration put together has no more people than the number of people that run a city like Birmingham”.

Britain, he argued, had a trading bloc equivalent to the size of the US and was on an “equal footing” when negotiating trade or airline deals.

He said: “We’re talking from a position of strength. If we go back to being Great Britain again we will have our hands tied behind our back.

“And I think Europeans will rightly punish us again, and we’ll be back to where we were 50 years ago.”

Sir Richard was not the only prominent figure who still hoped Britain would join the eurozone at the time.

When asked by BBC presenter Jon Sopel if Gordon Brown should be thanked for keeping the UK out of the euro, former Prime Minister Tony Blair said in 2011: “I was always absolutely in favour of doing it politically.

But he added: “Unless you can make a compelling case for it, economically, you were never going to win a referendum on it.

“And the case for Britain joining isn’t compelling.

“It may become that at a certain point.”

In an exclusive interview with Express.co.uk, Lord David Owen argued Mr Blair was obsessed with taking the UK into the monetary union while serving as Prime Minister.

The former Foreign Secretary and SDP co-founder said: “The EU will come unstuck in a big way and the big danger for this is the eurozone.

“Some people know I am a convinced European, in the sense that I thought the Common Market was a perfectly acceptable thing.

“I grew very worried about it when we got the eurozone.

“Instantly, I thought, ‘You can’t run a currency unless you are a country’.

DON’T MISS:
Elon Musk blamed Brexit for Tesla plant snub but he may not be right [INSIGHT]
London urged to turn into ‘Singapore’ as EU ‘in breach of WTO’ [REVEALED]
Macron torn apart by French MEP after UK clinches vaccine [EXCLUSIVE]

“That has been proven. I have a house in Greece and what I saw there in the last 10 years made me realise it would have been complete madness for us to join the eurozone.”

Lord Owen noted: “There is no doubt that Tony Blair would have taken us in tomorrow.”

During his years as Prime Minister, the former Labour leader made one of the strongest cases for the country to adopt the single currency and often claimed it would have been a “betrayal” of Britain’s national interest to stay out of the monetary union.

He was arguably stopped by his then-Chancellor of the Exchequer Gordon Brown, but according to Lord Owen, nobody could have done that.

In the early Noughties a false recovery signal was referred to as the Baghdad bounce after the rise in popularity that both then-US President George W Bush and Mr Blair enjoyed following the fall of Baghdad in the Iraqi War.