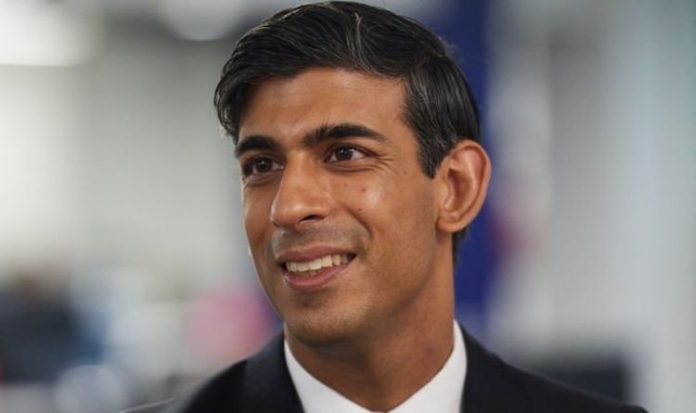 The job retention plan is expected to continue in any area of the UK hit by the highest level of coronavirus restrictions.

It will mean workers continue to receive 80 per cent of their pay under the strictest local lockdowns.

Ahead of the Chancellor’s statement, Bank of England chiefs will reportedly announce plans to pump at least £150 billion of extra money into the economy as the markets open today.

The latest round of money printing comes amid fears lockdown will plunge the UK into a double-dip recession.

Interest rates are expected to be kept at 0.1 per cent, with the central bank holding back from setting negative interest rates for the first time.

The Chancellor has warned that the new restrictions in England will have “significant additional impacts” on the UK economy.

In a letter to the Treasury Select Committee yesterday Mr Sunak said while there will be a hit from the latest measures, it is likely to be different to that seen after the spring lockdown.

Writing to the committee’s chair Mel Stride, he said this time schools remain open, while businesses are also more prepared for home working.

He said: “The further restrictions announced by the Government will have significant additional impacts on the economy and society.

“However, the Government’s policy is not the same as the previous national restrictions and nor is the environment in which these restrictions are coming into force.”

He added: “Some businesses may be more prepared for working from home than was the case prior to previous restrictions, while the labour market enters these restrictions in a weaker state than in March, and so do corporate balance sheets, including in the worst-affected sectors.”

Rishi Sunak is tipped to extend the furlough scheme beyond the end of lockdown on December 2 (Image: Getty )

It comes as Boris Johnson apologised to businesses for the “nightmare” Covid situation and vowed that the new shutdown will last no longer than a month.

In a pre-recorded speech to the Confederation of British Industry (CBI) conference, the Prime Minister said the new restrictions due to be voted on by MPs will “expire” on December 2 following speculation that the shutdown could be extended.

“I want to apologise to all of you who are experiencing the frustrations and the nightmare of the Covid world,” he said.

“I know how tough it has been for you and I’m full of admiration for the determination you’ve shown in persevering through this crisis.

“I want to thank you for the heroic efforts you’ve made to look after your employees, to make your premises Covid-secure, putting in Perspex screens, all the trouble you’ve gone to in complying with the kinds of diktats that I never believed we would have to impose which, I assure you, go completely against every free market instinct I possess.

“And, believe me, we will end these autumn measures on December 2 when they expire.”

But he said the lockdown, due to start on Thursday, is necessary if England is to push the rate of Covid-19 down and alleviate the strain on the NHS.

Mr Johnson had been due to address the CBI on Monday but was forced to postpone in order to take questions in the House of Commons about the month-long measures.

In his speech, filmed in Downing Street, he praised businesses that had stepped in to aid efforts against coronavirus this year by switching their production lines to make hand sanitiser gel, personal protective equipment and extra ventilators.

“It is thanks to British technical innovation that we are now in a far better position than we were during the first wave,” said the Prime Minister, adding that there is the “prospect of a vaccine in the first quarter of next year”, with UK scientists leading the charge.

He told the conference it would be businesses that help “drive our recovery” after the pandemic and pledged to “do whatever it takes” to help industry bounce back from the economic setbacks caused by coronavirus.

The Prime Minister has vowed that the new shutdown will last no longer than a month (Image: Getty )

Taking the analogy of a business in Wales that has set up a trampolining centre in a disused coal mine, Mr Johnson said: “No matter how deep the hole you think you’re in, you can always bounce back.

“And that is what we will do together.”

CBI director general Dame Carolyn Fairbairn said: “The Prime Minister’s heartfelt commitment to backing British business could not be more necessary or welcome.
“It’s only through thriving enterprise that our economy will bounce back from this crisis.”

The Bank of England is expected to slash its growth forecasts for the economy today and pump in another £100 billion of quantitative easing to boost the economy.

The government has committed to relaunch its support for workers and businesses throughout the winter.

The nation has pumped more than £350 billion into supporting the nation throughout the pandemic (Image: Getty )

It has already handed out more than £100 billion in furlough payments, financial support for the self-employed and loans for businesses.

On Tuesday Mr Sunak announced that the self-employed will be able to claim state aid of up to 80 per cent of profits during the month-long lockdown.

The rise is up from the previous 40 per cent, and will mean £4.5 billion of government support for the self-employed between November and January.

Businesses will continue to be able to apply to banks for government-backed support loans until 31 January, compared with a previous 30 November deadline for some of the programmes.

Overall the government has pumped more than £350 billion into supporting the nation throughout the pandemic.