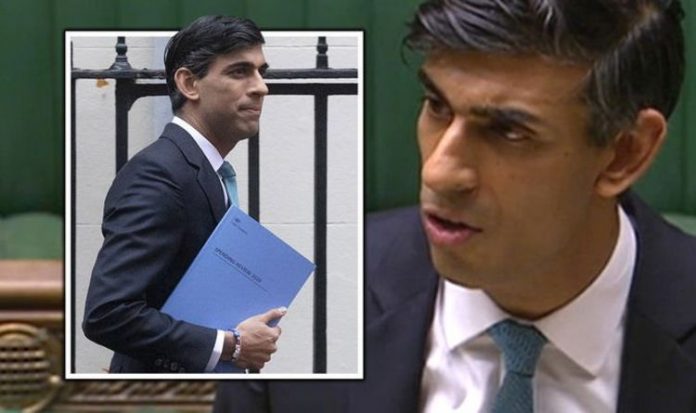 The Chancellor will splash out on new hospitals, better schools and stepping up the fight against crime next year. And he insists the Government can still “deliver on the priorities of the British people” despite the huge damage to public finances caused by the pandemic. Mr Sunak’s promise to continue “strengthening” public services follows his autumn Spending Review statement yesterday, when he announced an extra £55billion for Whitehall departments in 2020/21. There was also £100billion for major construction projects.

In his message to Daily Express readers, the Chancellor said: “Coronavirus has caused immense hardship for individuals, families and businesses across the UK – bringing a health and economic emergency that has affected us all.

“From the very start we’ve focused our efforts on protecting people’s lives and livelihoods. And this will continue as we fight the virus in the months ahead.

“As part of the Spending Review we’re pumping billions of pounds into winning this battle. But we’re also delivering on the priorities of the British people.

“Billions more will be spent on strengthening our public services with new hospitals, better schools and safer streets.

“And we’re investing in our recovery with £100billion of capital projects to create jobs and drive our economy forward.”

The Chancellor insists the Government can still ‘deliver on the priorities of the British people’ (Image: PA)

Key measures in the Spending Review include:

● A £14.8billion increase for public services next year, including £6.6bn more for healthcare, £2.2bn more for schools, £1bn more for the criminal justice system and £3bn more for local councils;

●£4.3billion for helping the unemployed get back to work;

●A UK Infrastructure Bank to be based in the North of England from next spring to rapidly unlock investment for major construction projects;

●A “Levelling-Up Fund” worth £4billion for local projects across the country.

Nurses and doctors will be spared the pay restraint in recognition of their roll in battling Covid (Image: Getty)

However, the Chancellor also warned that the country was on the brink of an “economic emergency” due to the impact of coronavirus lockdowns on businesses.

He revealed that tackling the coronavirus pandemic had already cost the Government £280billion.

And data shows that the Treasury is forecast to borrow a total of £394billion this year, equivalent to 19 per cent of Gross Domestic Product and the highest recorded level of borrowing in the country’s peacetime history.

Meanwhile figures from the Office for Budget Responsibility predict the economy will shrink by 11.3 per cent, the largest fall in output for more than 300 years.

And unemployment is set to soar to 2.6 million next year, the financial watchdog forecast. Mr Sunak said: “Our health emergency is not yet over and our economic emergency has only just begun.

“Even with growth returning, our economic output is not expected to return to pre-crisis levels until the fourth quarter of 2022.

“And the economic damage is likely to be lasting.

“Long-term scarring means in 2025 the economy will be around 3 per cent smaller than expected.”

Despite the titanic debt, the Chancellor told MPs that Whitehall spending will soar to £540billion next year, while also pledging to slash the overseas aid budget and block pay rises for millions of public-sector workers.

Nurses, doctors and other frontline NHS workers will be spared the pay restraint in recognition of their role in battling coronavirus.

He noted that state employees had been protected from the pay cuts and redundancies suffered by the private sector.

He then announced that the aid budget would be cut from the 0.7 per cent of the country’s gross domestic product, as required by law, to 0.5 per cent.

It triggered a backlash from some Tories, with Foreign and Develop-ment Office minister Baroness Liz Sugg resigning in protest and former prime minister David Cameron condemning the move.

But Mr Sunak said: “Sticking rigidly to spending 0.7 per cent of our national income on overseas aid is difficult to justify to the British people, especially when we’re seeing the highest peacetime levels of borrowing on record.”

The 0.5 per cent would represent around £10 billion, he added. His statement to MPs made no mention of tax rises, which officials expect will follow in the Budget next spring.

Rishi Sunak will splash out on new hospitals, better schools and step up the fight against crime (Image: Getty)

The Chancellor warned: “This situation is clearly unsustainable over the medium term.

“We could only act in the way we have because we came into this crisis with strong public finances. And we have a responsibility, once the economy recovers, to return to a sustainable fiscal position.”

Office for Budget Responsibility figures suggest he will need up to £46billion in tax hikes to stop debt rising as a proportion of Gross Domestic Product.

The watchdog expects the economy to bounce back with 5.3 per cent growth next year and 6.6 per cent in 2022 – as long as a coronavirus vaccine is successfully rolled out next spring. Meanwhile Mr Sunak outlined the details of his £4billion “Levelling-Up” fund to spread prosperity to struggling parts of the country.

He said: “This Government is funding the things people want and places need.”

But he added: “We can set the direction – better schools, more homes, stronger defence, safer streets, green energy, technological development, improved roads, enhanced rail…all investments that will create jobs and give every person in this country the chance to meet their potential.

“But it is the individual, the family, and the community that must become stronger, healthier and happier as a result. This is the true measure of our success.”