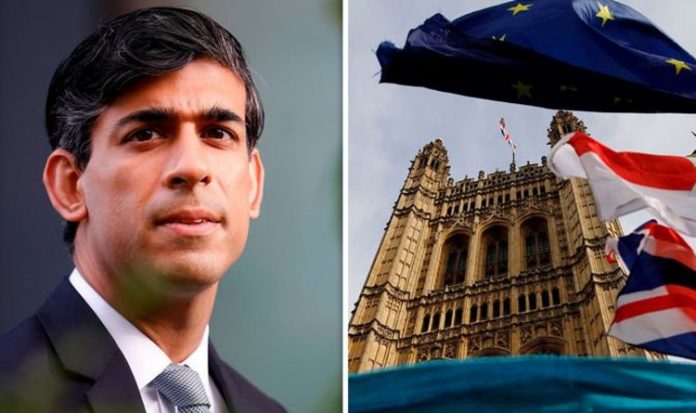 At the end of January, Chancellor of the Exchequer Rishi Sunak hailed the potential for a “Big Bang 2.0” in the City of London after Brexit as he hinted that the Government is ready to slash red tape. The Chancellor raised the prospect of a Margaret Thatcher-style surge for the City. He stressed that while equivalence and other elements were important, his main focus would be to make sure the Square Mile “remains the most dynamic place to do financial services anywhere in the world”.

In an interview with City AM, Mr Sunak said “there are many things in the deal that are good for financial services”.

In a recent report for Global Vision UK, the director of the eurosceptic campaign ‘Get Britain Out’ urged Mr Sunak to apply the “Big Bank 2.0” vision he has for the City of London to all other post-Brexit policies.

Jayne Adye warned that if more money is not invested to develop Britain’s future outside the EU, these sorts of policies will end up in the hands of the “silly civil service”.

She wrote: “It is vital the same kind of impetus is put into taking advantage of our ‘Freedom from Brussels’ to deliver on the opportunities Brexit provides us with – and quickly.

“A prime example of one of the opportunities now available to us is the issue of Freeports, which the Government placed front and centre of its plans for reinvigorating the country in their 2019 General Election Manifesto.”

Ms Adye noted it has been more than a year since the election, and despite the UK now being fully out of the EU, the decision on which areas will receive this Freeport status has still not been confirmed.

She wrote: “In Prime Minister Questions this week Boris Johnson even confirmed a decision will not be made until the Spring. Surely decisions like this should have been ready to announce on January 1 to signal our first steps on the path to ‘Global Britain’ and a more advantageous approach to investment in this country. If we want the benefit these Freeports will undoubtedly bring, they need to be in operation as soon as possible.”

On top of this, the prominent Brexiteer wrote, real investment is severely lacking in the port system and border infrastructure.

She said: “The Government’s flagship Port Infrastructure Fund (PIF) has allocated only £200 million to be spent on new border and storage infrastructure for our nation’s ports.

“However, this money was not made available until December 17, meaning it was not realistically ready to spend before the end of the transition.

“It will clearly now be a huge rush to get any large infrastructure projects built in time for the full implementation of the UK’s new Border Operating Model in June this year – only five months’ away – a deadline also set by this Government. You would think some forward planning and coordination would have already been made – but apparently not!”

Ms Adye concluded: “These examples are just the start of the issues which need to be addressed by the Government if they want the realities on the ground in this country to match up to the vision of post-Brexit Britain which we all want and need.”

In an exclusive interview with Express.co.uk, Conservative MP John Redwood also urged the Government to hurry up with Freeports.

He said: “Freeports are an incredible idea.

“The freer these ports are, the better.

“The idea is that you don’t have to charge all the taxes on products that you import temporarily in order to turn them into value added exports.”

The prominent eurosceptic added: “But you can go further than that…

“I would add enterprise zones to the free ports, so they are areas where there is very active enterprise promotion but lower taxes and less regulations in order to allow them to work better.

“That would be a very good way of building larger towns and cities around the country with more industrial and commercial activity.

“We want to reduce our dependence on London and South East, as we are a global trader, and the ports don’t have to be clustered around Kent and London.”