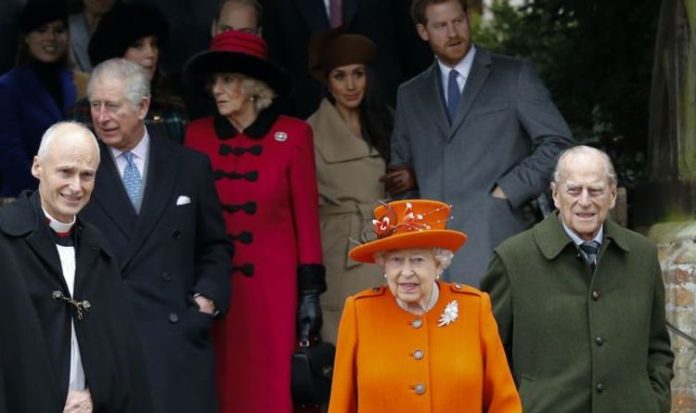 Christmas Day will be unrecognisable for the Royal Family this year. After the new Tier 4 coronavirus restrictions were put into place on Sunday morning, swathes of the South East and London – where The Firm is based – will be isolated further than what the prior rules had allowed for. For the Queen, a tough period awaits.

She has a huge family: four children, eight grandchildren, and nine great-grandchildren from several different households.

Sandringham is usually her Christmas base, but this year she and Prince Philip will spend it at Windsor Castle.

Other members of the family will also celebrate Christmas within their personal bubbles.

Traditions, then, will be thrown out of the window.

The family has many festive practices, some stranger than others.

One sees guests of Sandringham each required to weigh themselves on a scale before they’re allowed to eat Christmas dinner.

Described by Insider as “bizarre”, it apparently dates back to the early 1900s.

The Talko reported that the family uses an “antique scale” with everyone “expected to take place”.

Because the weigh-in applies to everyone, Meghan Markle and her mother Doria Ragland likely participated when they spent Christmas at Sandringham in 2018.

Others, like Kate Middleton’s mother and father, Carole and Michael Middleton, have never been invited to spend Christmas with the royals and thus would never have been asked to weigh-in.

At the time, Ingrid Seward told Grazia: “It is unusual for an outsider to be invited, but the Royal Family does change.

“I’m sure the royals will do everything in their power to make Doria feel at home.”

Guests who are invited to Sandringham are also expected to enter the dining room in order of seniority” and wear paper hats – although Insider claims the Queen “doesn’t wear one”.

Meanwhile, Prince William and Kate are said to be spending Christmas with their three children at their Norfolk home, Anmer Hall.

They managed to leave Kensington Palace before London was placed into Tier 3 and Tier 4 restrictions which limit non-essential travel, having originally planned to visit Kate’s family in Berkshire.

Prince Charles and Camilla, Duchess of Cornwall, have opted to spend the day at Highgrove, Gloucestershire, which is in Tier 2.

Other royals, like Prince Harry and Meghan were never expected to return home, regardless of the coronavirus restrictions in place.

They are abroad, in the US, the day marking baby Archie’s second Christmas.