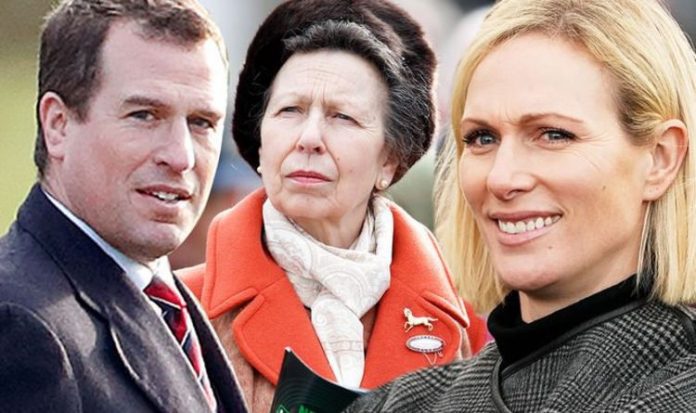 Zara and Peter are the grandchildren of Her Majesty the Queen. Despite their being placed in the Royal Family’s inner circle, the pair have enjoyed relative privacy throughout their lives. This is because unlike their cousins they do not carry royal titles.

Their mother and father, Princess Anne and Mark Phillips, decided early on that to ensure their children had normal lives, their royal titles would need to be renounced.

Anne has often been described as one of the hardest-working members of the family, with many commending her work and services to over 200 organisations she is patron of during the BBC’s 2010 documentary, ‘Inside Sport: The Princess Royal at 60’.

It was here that Zara spoke of her admiration for Anne, while Peter reflected on the “get on with it” lifestyle they had been brought up under.

Zara said: “It’s amazing how much she can fit into a week.

“The amount of different places she goes to in the country and people she meets and, she always remembers everyone she’s met.

“It’s just unbelievable, her capacity to do all of it.”

JUST IN: How Zara Tindall children will be related to Princess Eugenie baby

An instance of the hard-work gene in action was found when Zara made a fleeting visit to New Zealand to attend an event held by the CatWalkTrust founded by former champion rider Catriona Williams. who became a tetraplegic after a horse riding accident in 2005.

Shortly before the event, Zara gave an interview to 1 News, in which she divulged how “normal” her life had been without a royal title.

“Just getting up and training, doing the horses.

“Also having Mia – it’s great to be able to do them both so closely.

Zara has followed in her mother’s footsteps and has also become a patron of several charities and organisations.

More recently, she helped raise money for the NHS through the Equestrian Relief programme.

Speaking about the event in a video call on BBC Breakfast earlier this year, Zara said: “We are going to an Equestrian Relief.

“There will be five teams of us doing five tasks and we do two tasks each.

“The tasks are running five kilometres, a plank, bake-off, a piece of art and a hidden talent.”