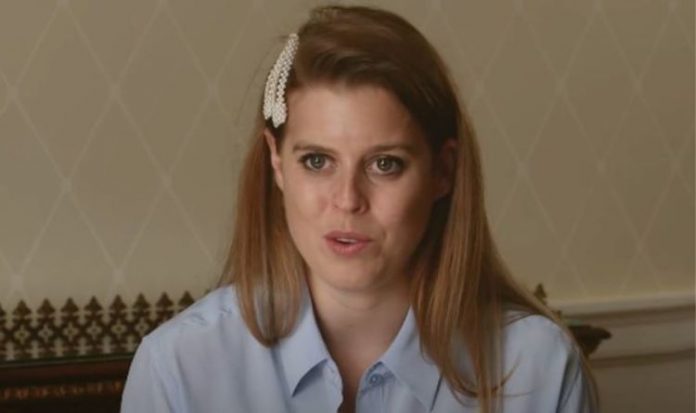 Last month, under the veil of secrecy, Princess Beatrice married property tycoon Edoardo Mapelli Mozzi. An isolated celebration, the celebration was a toned down version of what is usually seen on such royal occasions. The pair had intended to get married at the end of May but they were forced to delay their special day for two months given the lockdown rules at the time.

The couple kept the rescheduled date quiet after a spokesperson told People Magazine in March that: “There are no plans to switch venues or hold a bigger wedding.

“They aren’t even thinking about their wedding at this time.

“There will come a time to rearrange, but that’s not yet.”

Shortly after the wedding, in a statement, the palace said the ceremony was “small”, had taken place at 11.00am BST on July 17 and was in accordance with all relevant government guidelines.

Royal news: Beatrice said her dyslexia is a point of strength in the workplace (Image: Made By Dyslexia)

We Day Beatrice at the children’s empowerment event (Image: GETTY)

Beatrice keeps a relatively low profile compared to other royals, but is largely known for her charity work and work within organisations that help children with dyslexia; this given her own struggles with the learning disorder.

Earlier this year, Beatrice, speaking to Made By Dyslexia, revealed the strength which she and other dyslexia sufferers have over others in the professional world.

She said: “One of the reasons why I think it’s a great time to be dyslexic now is because that narrative is starting to change.

“I think employers are very aware that they do have to rely on a different set of skill sets.

Royal family: Beatrice and her sister Eugenie are known to have a good relationship (Image: GETTY)

“I’m very lucky I’ve been able to find a job that relies on my communication skills a lot more than it is me sitting behind a desk.

“A lot of my colleagues also have dyslexia because we work in a technology company that is always about looking at things differently.

“And I think that’s one of the strengths that we have as dyslexics; is to look at things differently and be a problem solver, and find new ways to do things.

“To be experimental, entrepreneurial.”

Shortly before this, Beatrice condemned the way the UK’s education system operates.

Her comments are especially salient given the GCSE results fiasco and subsequent government U-turn.

She explained: “I think that education now, when you’ve got a lot of young people that are focusing on just getting things perfect for a test and absolutely not being able to have that moment of expression.

“That comes from a study around lifelong learning and actually what skills based learning really looks like we are going to get ourselves into a very difficult situation.”

Royal romance: The pair have known each other for years but only started dating in early 2018 (Image: Express Newspapers)

With that said, the royal did admit she was encouraged by the work currently taking place to ensure a better learning experience.

She said: “I’m really excited with all the work that’s going on now with a few different organisations across the world to really think through what is skills based learning and what are the skills that young people need to be able to thrive in life.”

An estimated 10 percent of Britain’s population has dyslexia.

Around 4 percent has the more serious dyslexia continuum disorder.

The Queen: Beatrice and the Queen are known to have a good relationship (Image: GETTY)

In all, the figures equate to around 7.3million people.

Yet, according to the Dyslexia Action organisation, the figure is much more likely around the 16 percent mark, or 11.5million people.

Globally, the disorder is thought to impact 5 to 10percent of the world’s population.

Although due to under representation, the figure is thought to be somewhere in the region of 17 percent.