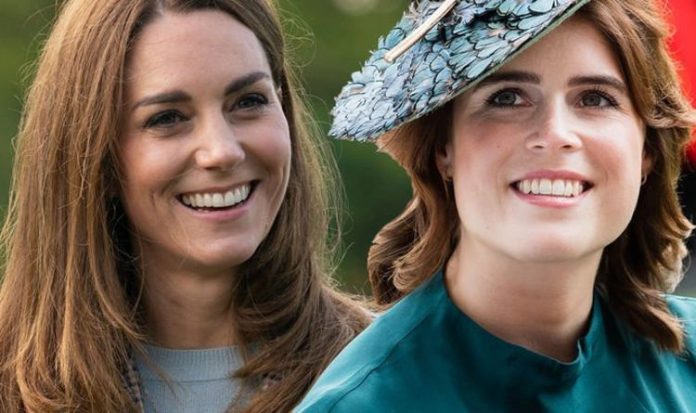 Princess Eugenie opted for a more low-key engagement ring than her sister, Princess Beatrice, and her ring was rumoured to cost between seven and £10,000. The ring features a large Padparadscha Sapphire, a rare jewel with a pink hue to it, surrounded by diamonds. Although the ring is stunning in its design, royal observers couldn’t help but compare it to the Duchess of Cambridge’s sparkler, and it turns out there’s a close link between the two.

At the time, Eugenie’s now-husband Jack Brooksbank said he chose the ring because “it changes colour when it hits a certain light, much like Eugenie”.

While the ring has retained its uniqueness thanks to the sapphire, fans were quick to point out how much it looks like the Duchess’s ring, which is of course the blue sapphire surrounded by diamonds that used to be worn by Princess Diana.

But, in actuality, Jack is more likely to have been inspired by Eugenie’s mother, Sarah, Duchess of York, and the engagement ring she was gifted upon agreeing to marry Prince Andrew.

Jamie Samhan, deputy editor at Royal Central, told Marie Claire: “Many people noticed the resemblance to the Duchess of Cambridge’s engagement ring that once belonged to Diana, Princess of Wales.

“The reason that they look very much the same is that Diana’s ring was by Garrard & Co in 1981, and Sarah’s ring was from the same designer a few short years later in 1986.”

While Prince Andrew did design Sarah’s ring on his own, jewellers tend to have a house style they stick with.

This means the Duke of York was likely inspired by other designs of the time – including the one Prince Charles picked out for the Princess of Wales.

Both couples picked the rings out from the same catalogue, which caused controversy at the time considering neither were a family heirloom.

The couple recently announced they were expecting their first child, in what comes as good news after a difficult year for the Royal Family.

Announcing the pregnancy in a statement, Buckingham Palace said: “Her Royal Highness Princess Eugenie and Mr Jack Brooksbank are very pleased to announce that they are expecting a baby in early 2021.

“The Duke of York and Sarah, Duchess of York, Mr and Mrs George Brooksbank, the Queen and the Duke of Edinburgh are delighted with the news.”

READ  Families reunited as asylum seekers transferred to the UK

Eugenie’s parents, the Duke and Duchess of York, will become grandparents for the first time, while this royal baby is expected be 11th in line to the throne.

Although Eugenie is a princess, Jack has no title meaning the child will be born down the female line of the Royal Family.

This means that unless the Queen intervenes, the royal baby will not have a title or be an HRH.

In order for the baby to have a title, the monarch would have to give Jack an earldom or amend the existing rules.