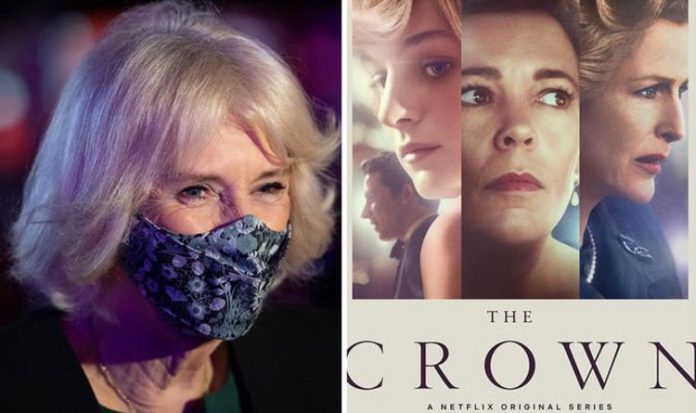 Camilla has recently been on the receiving end of a furious reaction to the Netflix drama, in which she is not portrayed in the best light. Season four of The Crown, which dropped last month, centres on Prince Charles and Princess Diana’s failing marriage. It depicts the increasingly miserable Princess of Wales, played by Emma Corrin, dealing with depression and bulimia, rows with her husband and a frosty reaction from the Queen when she goes to her for help.

It also features Camilla, played by Emerald Fennell, who is seen having numerous phone calls with Charles in which he complains about his wife’s immaturity and his desperation to leave her.

Charles’ love for Camilla and their affair lasting several years is highlighted as one of the reasons for the breakdown of the Waleses’ marriage.

Diana fans took to social media to attack the Duchess of Cornwall, causing the Clarence House Twitter account to turn off comments, stemming the slew of abuse.

Despite the anger directed at her, Camilla’s friend revealed she actually watches The Crown.

READ MORE: Charles still eclipsed by Diana as trip ‘overshadowed by The Crown’

They said: “She has a wonderful sense of humour and this won’t fuss her in the slightest.”

Camilla has been through a lengthy process of rehabilitation both in the minds of the public and the Royal Family since Diana’s tragic death in 1997.

She began to appear more and more with Charles in public, with the Queen finally acknowledging their relationship in 2000.

The couple got married in 2005 and Camilla took on the title of Duchess of Cornwall.

However, she is also the first to leave the Norfolk estate after the festivities, because she likes to spend some time with her own children.

The Duchess generally leaves Sandringham on December 27 to travel to Ray Mill, her house in Wiltshire where her son Tom Parker Bowles, her daughter Laura Lopes and her five grandchildren ‒ Lola, Freddy, Eliza, Louis and Gus ‒ will be.

While there, she will likely watch the Strictly Come Dancing Christmas Special, which she cannot watch between all the royal traditions.

Camilla’s friends say that, since visiting the BBC TV set and becoming friends with judge Craig Revel Horwood, she loves the show.

They said: “Her difficulty is that Strictly’s Christmas Special is screened on Christmas Day, when she’ll be taking part in royal activities.

“So she’s recording it to make sure she can see it when she gets back to Ray Mill.

After a couple of days in Wiltshire, she usually travels to Scotland to spend New Year’s Eve with Charles at their Birkhall home.

This year, Christmas will be different of course as the Queen and Prince Philip have decided to cancel the Sandringham festivities and remain at Windsor Castle together.

Meanwhile, William and Kate admitted today they do not know what they are doing for Christmas yet as it is “so difficult to make plans”.

Prime Minister Boris Johnson has told Britons they are allowed to mix with two other households for five days over Christmas, but has warned restrictions may have to be tightened again if this causes a spike in coronavirus cases.