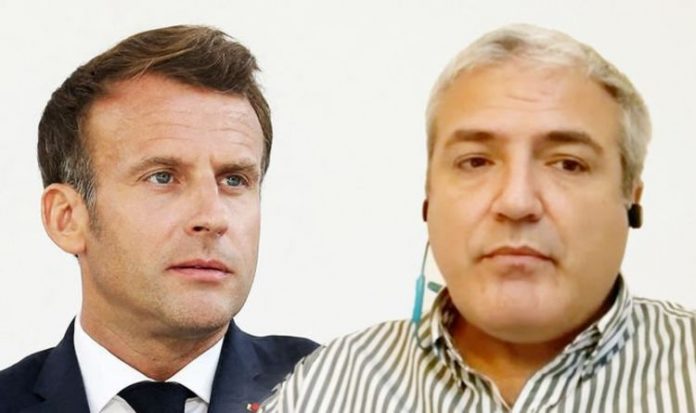 Brexit: Expert discusses why Macron has been ‘tough’ in talks

Just like during the negotiations on the withdrawal agreement, French President Macron is once again being extremely intransigent with Britain. Last week, the two sides were said to be close to reaching an agreement until several EU member states, spearheaded by France, raised serious doubts about the direction of talks. The EU’s chief Brexit negotiator Michel Barnier was forced to brief EU ambassadors and members of the European Parliament as diplomats were concerned that the French negotiator could be tempted to compromise too much to secure a deal.

According to senior political sources in France, because Mr Macron is facing domestic threats to his re-election, he would rather see the talks flounder than agree to a bad deal that could tempt other EU states to leave the bloc.

Europe’s power to protect itself from major global rivals, pandemics, economic crises, migration and climate change will be a major electoral argument for Mr Macron as he climbs up for his 2022 re-election bid, most likely against National Rally leader Marine Le Pen, who he defeated in 2017.

A source said: “France’s stance is to show that Brexit cannot be a success.

“From that point of view, the prospect of no deal is not necessarily a problem.”

In an exclusive interview with Express.co.uk, Italian MEP Marco Campomenosi criticised the French leader’s approach, as he argued many EU member states will be greatly damaged under a no deal scenario.

Italian MEP lashes out at Emmanuel Macron for playing hardball in Brexit talks: ‘He is weak!’ (Image: PA / EXPRESS.CO.UK)

When asked to explain why he is being so stubborn, Mr Campomenosi said: “Macron is fighting for his fishermen and fishing is a very symbolic sector in France.

“Unfortunately, it does not have much economic value there anymore, but it does see lots of citizens and families mobilised.

“For a weak leader like Macron, showing that he wants to defend French fishing is important.

“He wants to defend that sector, which traditionally supports other political parties, because we must not forget that we are approaching the presidential election.”

“A bit like French farmers, they have a clout, a political power beyond their actual numbers.

“I can understand why Macron is playing hardball. He is not doing too well in terms of popularity in those fishing regions at the moment and bashing the Brits never plays badly.

“However, fundamentally, no self-respecting country can agree to the terms he is seeking, and I think he knows that.”

Mr Carswell noted: “He is worried about getting re-elected, that is for sure.

“Like so many French Presidents he came in with really high hopes and to be fair to him, he has done something absolutely right in the way he responded to terrorist attacks.

“But, fundamentally, Macron is doing what all French Presidents have done with the overbearing nature of the French regulatory state.

“Trying to stimulate the French economy is a very difficult task and to have the French fisherman antagonising him at the same time must not be easy.”

He wrote: “As in the UK, the fishing industry’s economic contribution is small in France.

“Total sales were around €2billion (£1.8billion) in 2016, and Organisation for Economic Co-operation and Development (OECD) statistics show that less than 14,000 people were employed in the fishing sector in 2018. Employment in fishing has fallen by eight percent since 2011. But fishing, like agriculture, is symbolically important in France. And northern French fishermen take the majority of their catch from British waters.

“Macron might be worried about Xavier Bertrand, a high-profile former member of Les Républicains and potential 2022 candidate who is close with the industry.”

He continued: “Bertrand is president of the Hauts-de-France region. He served as health minister under Jacques Chirac and labour minister under Nicolas Sarkozy.

“Last month, he attended the general assembly of the Coopérative Maritime Etaploise, where he called for arm-wrestling with the UK in fisheries negotiations.

“More good optics for him. Bertrand has recently been spotted in meetings with a string of senior right-wing political figures, including LR [The Republicans] President Christian Jacob. Rachida Dati supports his candidacy, and Le Journal du Dimanche reports that he will meet with Nicolas Sarkozy next month. With the help of LR deputy Julien Dive, he has also been meeting with parliamentarians this week, and is set to meet with senators next week. His think tank La Manufacture has been mobilised to develop an election campaign strategy, and a recent Ifop poll put Bertrand at the top of the list of potential right-wing candidates.”

Trust in Mr Macron is continuing to plummet amid the pandemic.

According to a poll published in October, around 62 percent of French people admitted to not trusting their President.

The Elabe poll for BFMTV, which asked 1,000 people in France aged 18 and over, also found that nearly one in two people (47 percent) think the President is not taking “enough precautions” to limit the spread of the virus.

With the 2022 French presidential election nearing, these latest figures are clearly a worry for the En Marche leader.