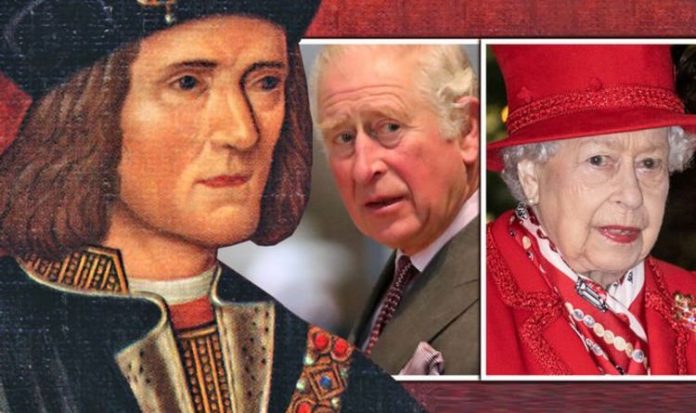 The Royal Family spans 37 generations and 1,149 years. Queen Elizabeth II is the 32nd great granddaughter of King Alfred the Great, who took the throne in 871 and ruled until 899 AD. The Firm is therefore a long and deep-rooted cultural, historical and political tie to the country.

However, this was all thrown into question in 2013 when a skeleton found in a car park the year before was confirmed to be King Richard III.

Richard had died in battle in 1485 but, before the 21st century, the whereabouts of his body had been a mystery.

After taking a DNA sample from the skeleton, the researchers discovered something odd.

When they checked the male line – the unnamed descendants of Henry Somerset, the 5th Duke of Beaufort – they found that the DNA did not match Richard’s, meaning at some point in history an adulterous affair had broken the paternal chain.

Royal Family: The Firm’s royal bloodline could have stopped before the Tudor’s (Image: GETTY)

The Firm: The analysis showed at some point an adulterous affair had broken the paternal chain (Image: GETTY)

And although this would have happened hundreds of years ago, the bombshell find had serious implications for the current Royal Family.

As TheTalko said: “As far as their DNA goes, they could be complete imposters.”

Called into question was whether kings such as Henry VI, Henry VII and Henry VIII had royal blood and, therefore, the right to rule.

The latter were part of the House of Tudor, which the current Firm shares a direct bloodline with.

JUST IN: Royal Navy: most glorious ‘cutting out’ operation in force’s history

As TheTalko explained: “Depending on how long ago the split happened means that there could have been several Kings and Queens who weren’t actually members of the Royal Family.”

Many were, however, quick to quell any speculation that the Royal Family wasn’t today’s legal monarchy.

Kevin Schurer, professor of English local history at the University of Leicester, told The Daily Telegraph in 2014: “The first thing we need to get out of the way is that we are not indicating that Her Majesty should not be on the throne.

“There are 19 links where the chain could have been broken so it is statistically more probable that it happened at a time where it didn’t matter.

Anne Boleyn ‘not given coffin as execution would not go ahead’ [REPORT]
Archaeology: Shipwreck ‘mystery unravelled in Arctic wasteland’ [INSIGHT]
Marie Antoinette did NOT tell hungry masses ‘let them eat cake’ [ANALYSIS]

History news: Richard’s skeleton was first found in 2012 and identified in 2013 (Image: GETTY)

“However, there are parts of the chain which, if broken, could hypothetically affect royalty.”

Because Richard III was childless, researchers looked at the descendants of Edward III, his great–great–grandfather.

Fathers pass a copy of their Y chromosome to their sons, so Richard and Edward should carry the same DNA.

And likewise, any descendant of Edward’s would share the same Y chromosome as Richard, and so a match would prove his royal descent.

They tested five anonymous living donors, all members of the extended family of the current Duke of Beaufort.

Yet scientists found that the DNA did not match, suggesting that someone, somewhere between Edward III and his descendants was illegitimate.

Furthermore, the analysis found that Richard, contrary to how artists have depicted him, had blonde hair and blue eyes.

At the time, Elizabeth Norton, a Tudor historian and author, said that the research could have wide implications for British history.

She told the Telegraph: “This is a very interesting finding.

“There are huge arguments about whether Elizabeth of York was legitimate.

“This might suggest that she did not have a royal bloodline and, if so, then the Tudors did not either.”