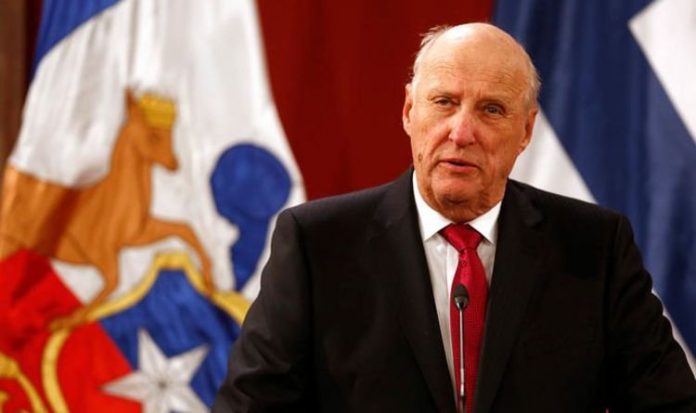 The Norwegian monarch, 83, is to remain off duty until Sunday, January 31, due to “pain in the leg”, it has been announced. His heir, Crown Prince Haakon, will assume the role of Prince Regent until the monarch returns.

A brief press release issued by the Royal Court read: “His Majesty the King is on sick leave until Sunday 31 January due to pain in his leg.

“His Royal Highness the Crown Prince Regent will lead the council of state on 29 January.”

Guri Varpe, head of communications at the court, said the palace won’t release any further comment on the King’s sick leave.

The cause of the pain in the King’s leg has not been revealed.

King Harald started walking with a cane in the autumn of 2020.

The Norwegian monarch has suffered a series of minor health issues throughout last year.

In January 2020, he was hospitalised after feeling dizzy.

It was later established King Harald was suffering from a viral infection, which doctors quickly cured.

The monarch remained on sick leave for 14 days before he returned to his normal royal duties.

In September, he was admitted once again to hospital for “heavy breathing”, with doctors immediately ruling out Covid-19.

The following month, 83-year-old King Harald underwent surgery in Oslo to replace a heart valve after his first heart operation in 2005.

In November, King Harald and his wife Sonja went into voluntary isolation after a royal court employee tested positive for COVID-19.

The couple was also tested and the results were negative.

Earlier this month, King Harald and Sonja, who is also 83, received their first dose of vaccine.

The royal couple is due to be inoculated with the second dose in early February.

News of their vaccination came less than a week after Buckingham Palace announced the Queen and Prince Philip had also received a jab against coronavirus.

A palace spokesman said: “The Queen and the Duke of Edinburgh have today received Covid-19 vaccinations.”

A palace source provided further details, saying the jabs had been administered by a household doctor at Windsor Castle, where the elderly royals are self-isolating.

They also said the decision to reveal the vaccination has been done was made by the Queen, in a major break with royal protocol.

They said: “To prevent inaccuracies and further speculation, Her Majesty decided that she would let it be known she has had the vaccination.”

Other members of Royal Family around Europe have received their coronavirus jabs, including Denmark’s Queen Margrethe.