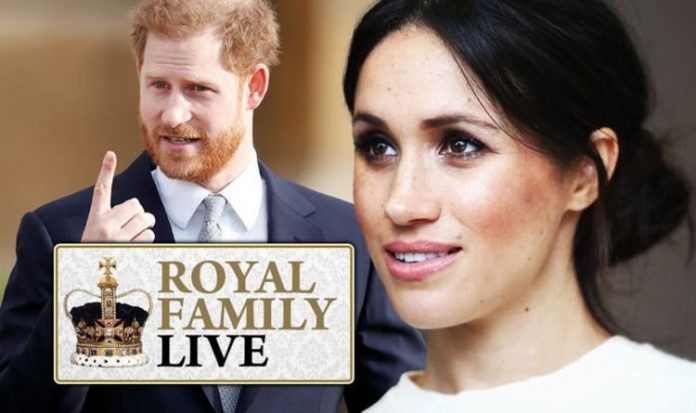 The idea of stepping back as full-time working royals to create a new role for the Sussexes within the Royal Family came from Prince Harry, a source close to the Duke has claimed. They said: “It came to the point where he wanted a different way of life.”

Meghan, the source added, was not the main drive or reason behind Megxit, as the Duke and Duchess of Sussex’s exit from the Royal Family was quickly dubbed last year.

Speaking to Vanity Fair, the source said: “Meghan was simply a catalyst.”

Meghan and Prince Harry released the bombshell statement which eventually led to their new, more independent life in California, on this day last year.

The couple had resumed royal engagements after their six-week break spent in British Columbia the day before, when they visited Canada House in London to thank the ambassador and staff for the hospitality they received in Canada.

Hours later, on January 8, they released a lengthy statement on their now-defunct Instagram account Sussex Royal and a newly-created website, SussexRoyal.com, in which they outlined what they wanted for their future.

According to their plans, the Duke and Duchess desired to “carve out a progressive new role” within the institution of monarchy.

This would have allowed them to live between North America and the UK with their son Archie, where they would both serve the Crown through visits and engagements as well as pursue financially profitable ventures.

Buckingham Palace first reacted to this bombshell statement with a brief message, in which aides simply said discussions were “at an early stage”, adding: “We understand their desire to take a different approach, but these are complicated issues that will take time to work through.”

The Queen was initially said to have been left “completely blindsided” by their statement.

Insiders later claimed the Duke of Sussex had requested a meeting with the monarch to discuss his future weeks before the Instagram post was published.

The Queen, Prince Charles and Prince William met Prince Harry at Sandringham a few days after the Sussexes’ statement was released.

There, they discussed the terms of Meghan and Harry’s exit as senior royals, and the agreement that resulted did not give the Sussexes the freedom they wanted to become part-time working members of the Royal Family.

Instead, Meghan and Harry were asked to relinquish the use of their HRH styles, the right to carry out royal duties and the use of royal in any future endeavour, including their branding.

The Duke was also stripped of his military patronages.

In turn, they were given the freedom to live abroad, retain their patronages

and become financially independent from the Sovereign Grant.

The royals are to reconvene in March this year, at the end of the 12-month review period agreed in Norfolk, to verify whether all parts are happy with

the terms in place or if the so-called Megxit deal needs to be changed.

Follow this blog for live updates on the Royal Family

8.10am update: Meghan Markle and Harry ‘put themselves as example of winning against the odds’ in speech

In the first episode of the series, the couple gave royal fans a glimpse into their personal lives.

The 33-minute podcast saw them also comment on 2020 as they hinted at “overcoming challenges”, an expert claimed.

Analysing the clip, speech and body language expert Judi James told Express.co.uk: “Harry and Meghan want you to know that they now think as one and speak as one.

“Meghan’s words are all about joint-think to the point of bonded personalities.

“She refers to ‘we thought…’ and ‘people we admire…’ to emphasise this intensely like-minded thinking and Harry echoes the impression using terms like ‘the message of this song is one we hold so dearly’.

“The more personal messages come when Harry and Meghan refer to their own lives and experiences, appearing to suggest heavily that they have overcome some massive challenges and hurdles of their own.”