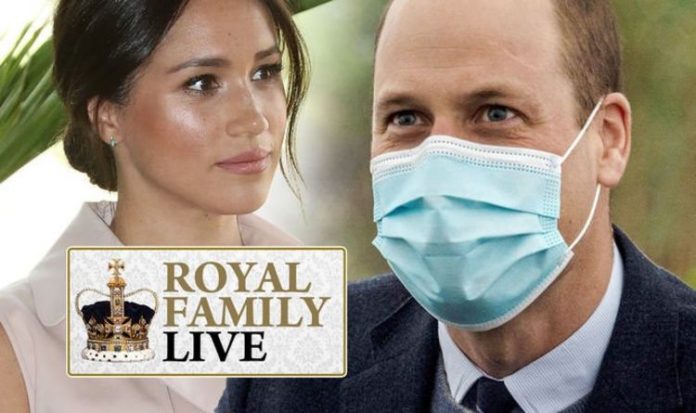 Fans of the Duchess of Sussex have reacted in fury after it emerged the father-of-three was struck down by COVID-19 in April but decided not to make it public. Meghan’s supporters pointed out William had not faced backlash for hiding his diagnosis, but Meghan was hit by criticism for shrouding her pregnancy in secrecy.

One tweeted: “William is reported to have been diagnosed in Apr at around the same time as his father.

“We are only hearing about it now, in Nov. Back at the birth of Archie, the proceedings were cloaked in secrecy. The backlash was swift & angry, Double Stds #MeghanMarkle”

Another said: “Meghan Markle’s treatment by the UK press and British Royal Family will stay with me, especially when pregnant.

“As the philosopher Michael Jordan said, I took that personally. She was expected to show every inch of her uterus but Prince William can hide COVID-19 & alleged affairs.”

Another said the contrast between William and Meghan’s treatment was “ridiculous”.

Another added: “Y’all now know what privacy is when a future king, Prince William, allegedly had a deadly virus.”

They said when Meghan was pregnant, however, the public “forgot what privacy was”.

A fan added: “Has #MeghanMarkle been blamed yet for the saintly #PrinceWilliam contracting Covid-19.”

Others even used it as a way to defend Meghan’s decision to quit the Royal Family with her husband Prince Harry earlier this year.

One added: “What a SHOCK there is no criticism of #PrinceWilliam’s lie regarding his supposed Covid diagnosis by the same #BritishMedia that would have eviscerated #MeghanMarkle & #PrinceHarry 10 different ways for the same thing by now. THIS is one reason the Sussexes said FU & ditched.”

Despite a loving family in full support of her, Zara offered harsh words for her father on looking back at the 2012 Olympic Games.

Mark, at the time, worked on the equestrian team for the US.

In a 60 Minutes Australia interview a few months after the Olympics, she said of this: “My dad was there, but he was on the other side.

“He coaches the Americans. He’s a traitor.”

The Queen had been informed about her grandson Prince William’s coronavirus diagnosis before the rest of the country, a source has claimed.

he Queen knew about Prince William’s illness and was worried about his wellbeing, a source said. They told Vanity Fair: “The priority was keeping HMQ shielded and safe, which was thankfully what happened.

But of course the Queen was worried for Charles and William and relieved that they suffered only minor symptoms.”

8.39am update: ‘Good for the country!’ Prince William was RIGHT to hide coronavirus infection – POLL

Prince William was right to keep his coronavirus infection secret earlier this year, a poll of Express.co.uk readers has indicated.

William, 38, tested positive for coronavirus in April, it has recently emerged, just weeks after his father Prince Charles announced he had been diagnosed with COVID-19.

A poll of more than 5,000 Express.co.uk readers has found the vast majority believe William was right not to share his positive test.

The survey, which ran between 9.30am on Monday, November 2 and 7.30am on Tuesday, November 3, asked 5,609 Express.co.uk readers whether Prince William was right to keep his COVID-19 diagnosis a secret.

Prince Charles has launched a gin based off of ingredients picked from his own royal residence.

Highgrove gin, named after the The Royal Gardens at Highgrove from which its herbal components were taken, is available to buy online. The price tag may be high for a bottle of gin at just under £40, but all proceeds from sales go towards the prince’s Charitable Fund.

Prince William’s coronavirus diagnosis was not a secret within the Royal Family, insiders have revealed.

A source said the the royal was “hit pretty hard by the virus – it really knocked him for six”.

The Duke reportedly kept his positive case secret from the public because “he just didn’t want to worry people”.

However, William did not keep his positive test results hidden from royals.