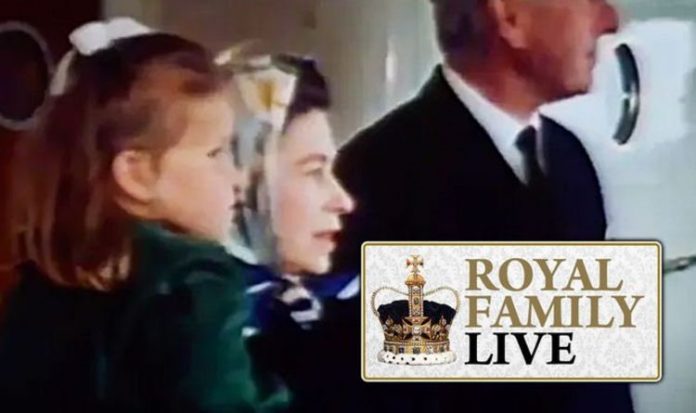 The controversial 1969 film titled “Royal Family”, which has not been re-broadcast in many years at the Palace’s request, was recently uploaded onto YouTube before being quickly removed. The 90-minute video documents a year in the life of the royals and has been locked away from public broadcast after it was deemed to be too intrusive.

In one extraordinary clip, the Queen and Prince Philip board the Royal Yacht and her Majesty can be seen holding a young child who bears a remarkable resemblance to her great-granddaughter Princess Charlotte, who would arrive 46 years later.

The young royal in the clip is actually the Queen’s niece Lady Sarah Chatto – the youngest child of Princess Margaret and Antony Armstrong-Jones.

The documentary gives a never-before-seen look into royal life and shows the Queen’s children at school – including Prince Edward.

It also features meetings with the Queen and her Private Secretaries on board the Royal Train and royal tours of Chile, Brazil and Malta.

The film shot was shot in 1969 and was also the year Charles became the Prince of Wales.

Producers Richard Cawston highlight how out of the ordinary it was for the Royal Family to take part.

He said: “Until we made this film, I really believe that none of them had ever spoken into a microphone anything which had not been carefully prepared.”
The Queen’s daughter Princess Anne famously hit out at the documentary.

She said: “I never liked the idea of Royal Family, I thought it was a rotten idea.

“The attention which had been brought upon one ever since one was a child, you just didn’t need any more.”