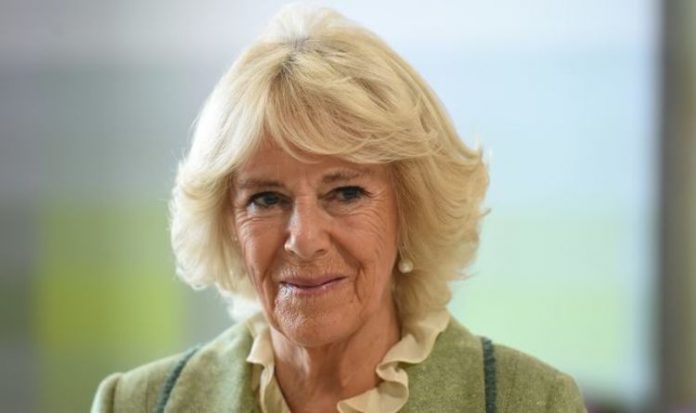 In the post, the Duchess honours Dame Laura Lee, head of the cancer charity Maggie’s, with the Outstanding Contribution Award. It was part of the inaugural Pride of Scotland Awards, as the charity is registered in Glasgow.

The Instragram clip shows Camilla presenting Dame Laura with the award – though it was set up to be a surprise.

The award came as a massive surprise to Dame Laura, who appeared close to tears.

It was uploaded to the Clarence House Instragram page – the official outlet of The Prince of Wales and The Duchess of Cornwall.

Clarence House said: “Earlier this year, Dame Laura Lee, Chief Executive of cancer charity Maggie’s Centres, came to Clarence House for what she thought was an interview about her charity work.

“Little did she know that there was a big surprise in store!

“In her role of President of Maggie’s, The Duchess of Rothesay, as Her Royal Highness is known in Scotland, presented Dame Laura with the Outstanding Contribution Award as part of the inaugural Pride of Scotland awards.”

Users on Instagram lined up to praise Dame Laura for her surprise award, as well as the Duchess for issuing it.

A user commended: “Wonderful! How to inject some fun into bestowing an award! Full marks all around to the bestower and recipient.”

One said: “I really love this whole exchange.”

One wrote: “Camilla is such a genuine person. Her heart is so big.”

Maggie’s says its support has led to £31.6 million in financial benefits being claimed, and that 96 percent of people “feel less alone” after visiting one of their centres.

Meanwhile, Camilla and her husband Prince Charles are currently residing at Highgrove House, according to reports.

The two spent the Christmas period there, and marked the first time the couple celebrated the seasonal festivities without the Queen, according to Hello! magazine.

READ  Change of Her Majesty’s Ambassador to Iceland: Bryony Mathew

It comes amid the ongoing coronavirus pandemic, which saw families across the UK having a quieter Christmas than usual.

The Queen and her husband Prince Philip traditionally spend Christmas at the Sandringham estate in Norfolk with other members of the Royal Family.

In other royal news, Camilla recently revealed that she will launch a book club – The Duchess of Cornwall’s Reading Room – in order to get Britons reading.

She has previously backed book-based ventures before, and hold a patronage for the National Literacy Trust, among others, reports.