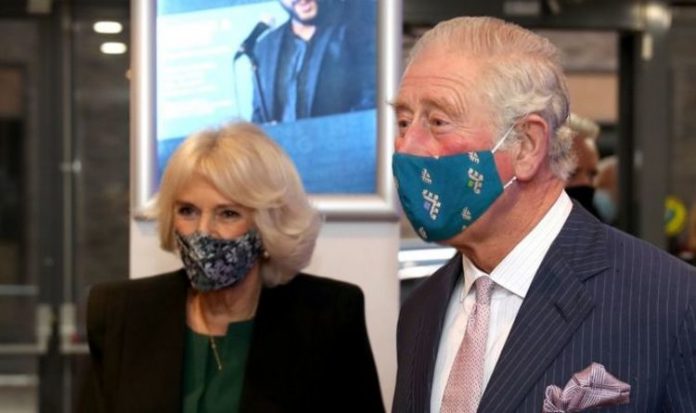 Charles and Camilla visited London’s 100 Club earlier this week, a basement club where bands like the Sex Pistols, The Jam and Oasis have played. During the visit, the royal couple added their signatures to a wall full of the names of musicians who have performed at the club over the years – in a breach of royal protocol.

Royals are not allowed to give out their signature because of the risk of it being forged.

It comes amid fury among royal fans, who have launched a tirade of criticism at Prince Charles and the Duchess of Cornwall, partly sparked due to their portrayal in Netflix’s The Crown.

The most recent season, which was released last month, follows Charles’ marriage to Diana and sees the heir to the throne have a long affair with Camilla.

The portrayal in the series, which has been heavily criticised for dramatising recent events, has partly led to fans demanding Prince Charles abdicates and hands the throne over to his son, Prince William.

Since Charles and Camilla’s royal visit to the 100 Club, calls for the heir to the throne to relinquish his claim surged on social media.

One person wrote: “I would like to meet one single person who supports Charles becoming King.

“He just needs to abdicate so we can get some young, fresh king and queen in the form of William and Kate. No one wants you or your side chick.”

A third said: “They will not get the respect, when and if they become king and queen?!.. Move aside and let #PrinceWilliam take over!!”

Prince Harry and Meghan Markle have been accused of making “pretty basic” communications mistakes by a leading PR expert.

The comment was made by James Brooke, managing director of London based Rooster PR.

The Prince, speaking in his capacity as African Parks president, spoke emotively about the need to fight climate change.

However speaking to The Guardian Mr Brooke argued Harry made communications mistakes demonstrating the Sussexes are still “floundering” when it comes to PR.

In particular he argued it was an error for the prince to speak about “doing not saying” from his £11.2million Los Angeles mansion.

Mr Brooke said: “The mistakes they are making are pretty basic. None of this is rocket science.”

8am update: Prince Charles depiction in The Crown to be raised with Prime Minister

A Tory peer has pledged to raise the depiction of senior royals in Netflix’s The Crown with the Prime Minister and in the House of Lords.

Lord Forsyth of Drumlean, a former Tory Minister under John Major, accused the streaming giant of having “crossed a line”.

Season four of The Crown, released last month, sparked controversy over its portrayal of the relationship between Prince Charles and the late Princess Diana.

Charles is depicted as continuing his relationship with Camilla Parker Bowles shortly after he married Diana when this didn’t happen until some time later.

Referring to Netflix Lord Forsyth added: “What they are doing is absolutely shocking. It is mendacious and it is untrue.

“And as every day goes by without any action on the issue, more and more people are seeing this programme, and unfortunately people believe this stuff to be fact.

“If Netflix are also using a corporate account in that way then the case for regulation is even stronger.”