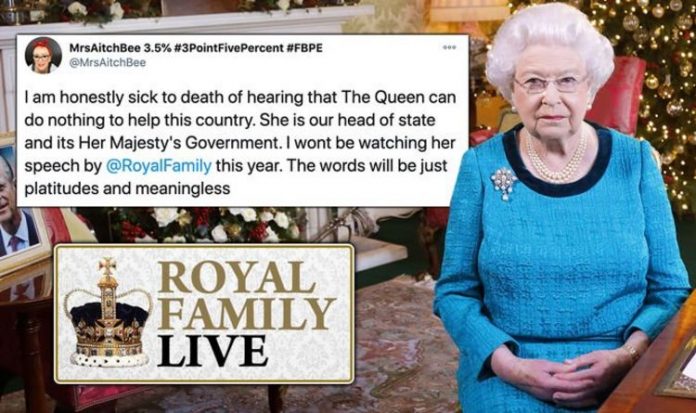 Queen Elizabeth has ‘no intention’ of stepping down says expert

Throughout the last year, the Government has been widely criticised for its handling of the coronavirus pandemic, which has caused more than two million infections and 67,616 deaths across the country.

Over recent weeks, the Government has made U-turns on various rules including announcing travel bans for those in London four days before Christmas.

Last weekend, countries around the world closed their borders to the UK in a bid to stop the spread of a new virulent strain of the coronavirus.

As the borders closed, people flocked to the shops to panic buy fresh produce, stripping the aisles bare.

To add to the panic of the coronavirus pandemic, the Government has also been working on securing a Brexit trade deal with the EU.

But with less than 10 days before the end of the transition period on December 31, a no deal is seeming more likely.

And now, amid ongoing Brexit talks and the coronavirus pandemic, some have taken to social media to attack the monarchy.

One person tweeted: “I am honestly sick to death of hearing that The Queen can do nothing to help this country.

“She is our head of state and it’s Her Majesty’s Government.

The Queen is a figurehead and purely ceremonial (Image: PA)

“I won’t be watching her speech by the Royal Family this year.

“The words will bee just platitudes and meaningless.”

While another person echoed: “The words of our unelected monarch are always just platitudes and meaningless.

“It’s all just nonsense aims at keeping the status quo and the money coming in, aided and abetted by a state-sponsored BBC.”

Someone else said: “If the Queen asks us all to pull together, I swear I will become a Republican.”

While another person said if the Queen can “literally do nothing” then it’s hard to see the point of the monarch.

They said: “I mean, if it’s true that she can literally do nothing, then it’s hard to see what the point of her, or any of her expensive extended family, is.”

Others urged for the UK to end the constitutional monarchy and called for the country to “grow up”.

The Queen addressed the nation this year during the pandemic (Image: Getty)

One person said: “A head of state that doesn’t act to protect her OWN PARLIAMENT from a rogue PM who is actively destroy it and the country, while protecting her son who is wanted by the FBI.

“I was agnostic, but now it’s time to end the constitutional monarchy.

“Britain needs to grow up.”

Another questioned why the monarch has been so quiet during the pandemic and Brexit negotiations, despite giving a speech to the nation earlier this year.

Public angry at Monarch for not getting involved (Image: Splash)

They said: “Strangely enough, I am wondering why the Queen has been so quiet.

“I understand there is a boundary between the Royal Family and Government.

“But seeing a country going into complete chaos?

“Our King of the Netherlands did show himself and did his best to give us strength.”

Another person accused the Queen of being “complicit or completely bloody useless”.

Despite being the Head of the State, Queen Elizabeth’s role is purely ceremonial meaning the power to pass legislation resides with the elected Parliament.

Many important Governmental actions are done “on behalf” of the Queen or she exercises her powers at the direction of the Prime Minister.

The British Royal Family started losing martial powers due to the signing of the Magna Carter in 1215, which led to the rule of constitutional law in England.

8.15am update: Meghan Markle ‘loved’ her first royal Christmas: ‘Family she never had’

Meghan Markle’s first Christmas with the rest of the Royal Family was “amazing” according to Prince Harry, which contrasts with the emerging reports of a feud between the couple and the Firm in recent months.

Meghan and Harry will be spending their first Christmas as a married couple in the US this year, along with their son Archie Harrison.

Reports claim the young family will be celebrating with Meghan’s mother, Doria Ragland, and the couple have already been spotted shopping for a tree at a Santa Barbara farm.

The Duke and Duchess of Sussex boycotted royal tradition last year when they decided to spend the festive season in Canada instead, as part of their extended break before they announced they had decided to leave the royal frontline.

8am update: Kate using ‘hands on’ parenting for Louis as experts claim Prince is Duchess’ ‘favourite’

Kate, the Duchess of Cambridge’s close relationship with her youngest child, Prince Louis, has been analysed by royal commentators who noted her and William’s “super hands-on” approach to parenting him.

Prince Louis may be Kate, the Duchess of Cambridge‘s “favourite” in the family, royal commentators have claimed.

Both of them noted the youngest royal’s behaviour, and attributed it to Kate and Prince William’s parenting style.