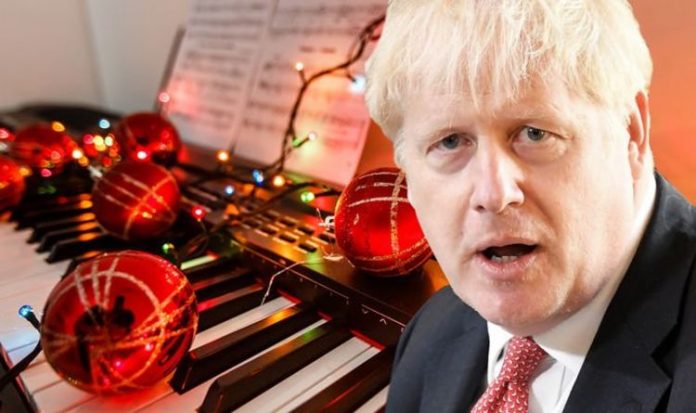 The track, by punk band The K**ts, features the lyrics: “Boris Johnson is a f***ing c**t” repeated over and over. Despite the fact the track is too explicit to be played on daytime radio, it has come to prominence after securing chart spots in the past couple of days.

Yesterday, when the song was at 19th, Radio 1 presenters Vick Hope and Kate Thistleton said the tune about Mr Johnson “has so many bad words in it, we can’t play it on daytime Radio 1”.

Many observers have taken to social media to blast the track, which has been described as “targeted bullying”.

One said: “This just isn’t nice. I don’t agree with Boris’ handling of the pandemic … but I don’t feel good about this, it’s just straight-up targeted bullying.”

Another wrote: “What a disgusting song, shouldn’t be given any promotion.”

Others dismissed the track as “childish” and “a bit of a negative message”.

Music magazine NME claims the track’s recent popularity may be a result of Mr Johnson’s decision to reverse a planned relaxation of coronavirus restrictions at Christmas.

READ: Bloated House of Lords gets even BIGGER as Queen agrees to more Life Peerages

The single edit of the track comes in at just 56 seconds long and is still available for sale on the iTunes store or Amazon.

On streaming services, the track is currently on top of Spotify UK’s ‘United Kingdom Viral 50’ chart.

Potentially in an effort to appeal to daytime listeners, The K**ts have issued a ‘safe for work’ version of the song that replaces the phrase ‘f***ing c***’ with ‘sausage roll’.

The band said on Twitter: “We had to find two works with the same amount of letters and discovered that ‘sausage roll’ fitted perfectly.”

Meanwhile the band’s lead singer – known simply as ‘K**t’ – told followers of Facebook “thanks very much and congratulations to all of you that have helped out”.

Bookmakers have set odds of 8/1 that the track makes it to the Christmas number one spot on Friday 25.

Usual contenders for the spot typically include traditional ballads like Mariah Carey’s ‘All I Want for Christmas is You’ or The Pogues’ ‘Fairytale of New York’.

However, it would not be the first time an unorthodox song has been pushed to the top of the UK charts at Christmas.

In 2009, rock band Rage Against the Machine topped the UK Christmas chart with hit single Killing in the Name, which had come out nearly two decades prior.