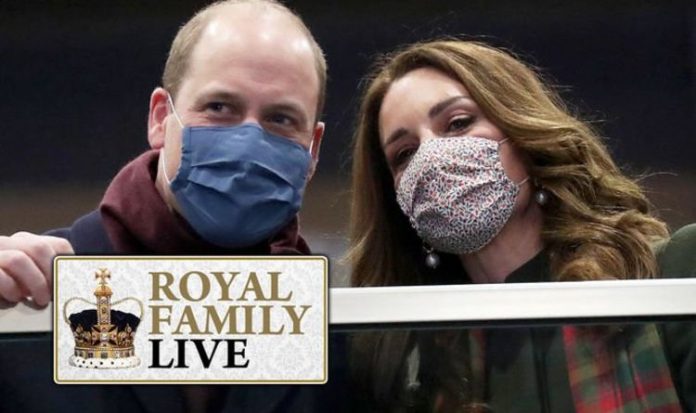 Kate, 38, and William, 38, and their three children were pictured at an outdoor Christmas-themed attraction at the Sandringham Estate on Sunday and appeared to break the rule of six with Prince Edward, Sophie, the Countess of Wessex and their two children. Kate, William, Prince George, 7, Princess Charlotte, 5, and Prince Louis, 2, were said to have “mingled” with another group of four – including Edward, 56, Sophie, 55, Lady Louise Windsor, 17, and James Viscount Severn, 13.

The two families were spotted walking around Luminate – a Christmas-themed woodland walk at the Queen’s Norfolk residence – which was also open to members of the public.

Both arrived and departed separately and royal sources insisted they had no plans to meet up as a party of nine, the Daily Mail reports.

Norfolk is covered by Tier 2 restrictions meaning people can see friends and family they do not live with outdoors, in a group of no more than six – this includes children of any age.

The royals have been defended by supporters on social media who pointed out they arrived and left in two different groups and maintained social distancing, while others insisted there are some exceptions to the rule of six.

Another said: “They didn’t break the rules. They came separately, stayed separately and left separately. They only walked together in social distance!

A third wrote: “So William, Kate, Sophie and Edward DIDN’T break the rules. In Tier 2 there are exceptions where people can continue to gather indoors, or in groups larger than 6 outdoors.”

A royal source insisted any contact between the two households was unintentional.

They said: “The two families were given separate consecutive slots to visit the trail just before it opened to the general public. They arrived and departed in their own family groups.

“As anyone with young children will know, there were moments on the 90-minute walk where it was difficult to keep the two family groups apart, particularly at bottlenecks on the trail.”

The Queens plans to receive a socially distanced visit from Prince Charles were ruined after Windsor was placed into Tier Four coronavirus restrictions.

Her Majesty and Prince Philip had decided to abandon the traditional Royal Family Christmas celebrations at Sandringham to instead spend a week alone at Windsor Castle.

Prince Charles and Camilla, Duchess of Cornwall, had reportedly hoped to visit the Queen during the festive period.

8.40am update: Camilla hailed an ‘absolute asset’ as she carries out engagement despite coronavirus

Camilla, Duchess of Cornwall, has been hailed as a “treasure” and an “absolute asset” for marking a cherished annual event with children despite the ongoing coronavirus pandemic.

The wife of Prince Charles has been lauded by social media users for carrying on with a tradition she started in 2007 despite the ongoing Covid-19 crisis.

Every year, the Duchess of Cornwall hosts children from one of her patronages and helps them add baubles to Clarence House’s Christmas tree.