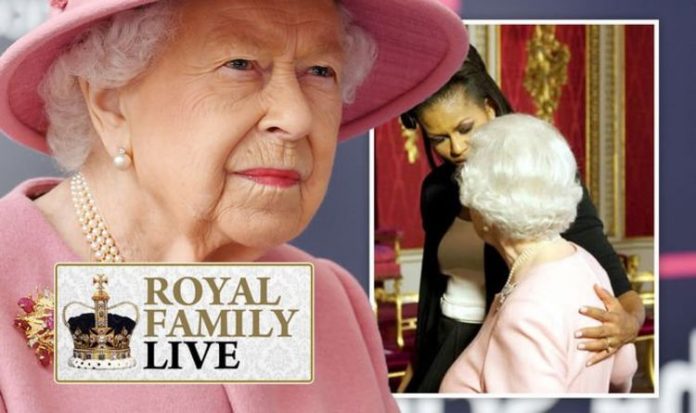 The then-First Lady was famously snapped placing her arm around the Queen as the pair engaged in a deep conversation. In his new book, A Promised Land, which will hit shelves on Tuesday, the former Democratic leader said the monarch “didn’t seem to mind” when his wife shunned royal rules.

Mr Obama batted away a row which erupted after photos and footage surfaced showing the moment Mrs Obama reached for the Queen’s shoulder.

He admitted his wife caused “her own bit of controversy” at the palace reception after the couple touched down in the UK for a G20 summit in April 2009.

Mr Obama was referring to the monarch briefly placing her arm around Mrs Obama’s waist as the ladies chatted in a palace reception room.

At the time, royal experts claimed the American first lady had thrown royal protocol out the window.

One commentator said the move was nothing short of “extraordinary”.

Promoting her memoir Becoming in 2018, Mrs Obama looked back to the moment and said it felt right to place an arm around the Queen as they bonded over sore feet.

She said she and the head of the Royal Family were “two tired ladies oppressed by our shoes”.

And referring to her decision to put her arm around the Queen, she said: “I did what’s instinctive to me any time I feel connected to a new person.”

Royal protocol strictly indicates that a person must not touch the Queen unless she offers her hand first.