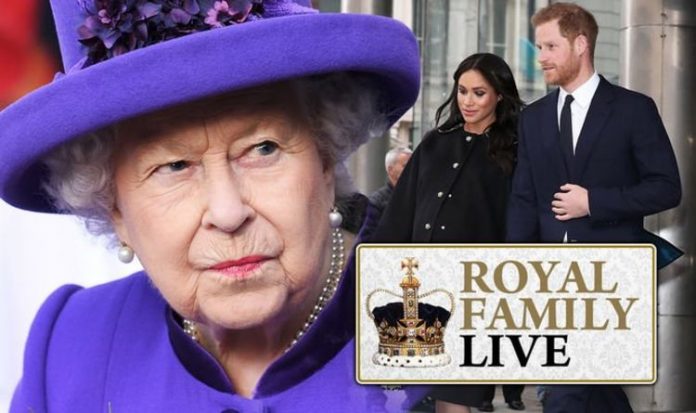 Meghan Markle and Prince Harry’s split from the Royal Family will be reviewed in March 2021, a year after the pair formally stood down as senior royals. But royal fans have suggested the Sussexes could be in for some bad news, after the Queen’s “New Firm” was unveiled.

The Queen is creating a “New Firm” made up of eight senior members of the Royal Family, who will attend events and represent the Crown in small numbers from next year.

The new slimmed-down monarchy will include the Duke and Duchess of Cambridge, Prince Charles and Camilla, Duchess of Cornwall, Prince Edward and Sophie, Countess of Wessex, and Princess Anne.

The group of eight royals, who all met for a socially distanced event on Tuesday night, will hold joint engagements events next year.

But royal fans have suggested there may be a hidden message behind the Queen’s decision to exclude some royals from the “New Firm” – including Meghan and Harry.

One person wrote on Twitter: “Sounds like Harry and his Mrs will be ousted in March, now take away their titles.”

Another user said: “The #Megxit review is happening before our eyes. HMQ’s thinking on The Firm, who’s in, & who’s out couldn’t be any clearer.

“The frenzy of Montecito PR has failed to gain any ground toward its ultimate goal of retaining #JustHarry’s military titles. The #Harkles are OUT!”

Dozens of royal fans also responded to praise the Queen on her decision, with many saying the “New Firm” is the perfect fit for the Royal Family going forward.