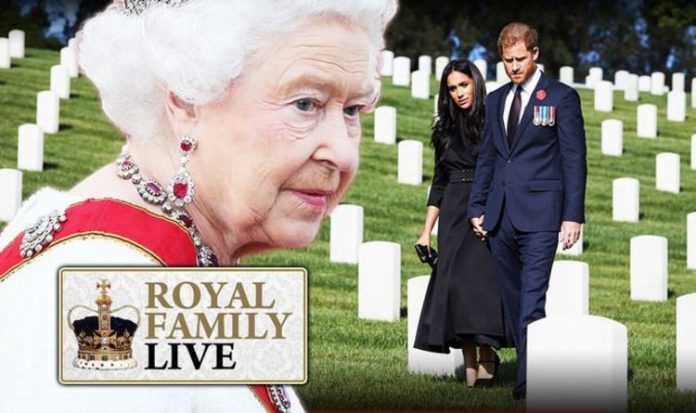 To mark Remembrance Sunday, the Duke and Duchess of Sussex visited a cemetery in Los Angeles to lay a wreath. However, their act was heavily criticised with many labelling it a publicity stunt.

Now, the Queen – who led the service in the UK – has been urged to strip the couple of their royal titles.

One person wrote on Twitter: “Their Royal titles and privileges are in the gift of the Monarch.

“The Queen gave them their titles and the Queen can remove them.

“The 12 month ‘probation period’ the Queen gave them is almost complete.

“Their Royal titles and privileges will be removed quite soon.”

Another person said: “Time for the Queen to remove titles from ‘Hapless Harry’ and ‘MeAgain’, and to remove Hapless and his descendants from the line of succession.”

Someone else told the couple to “stop pretending” they are still members of the Royal Family after stepping down earlier this year.

They said: “Yes live the way they want to live is fine.

“Who does that without any guilt? Harry and Meghan evidently.”

Someone else simply said they are fed up of hearing about the couple and urged them to be stripped of “all titles and let them be on their own”.

Another person said: “Meghan and Harry should have dropped their titles the minute they started to complain about the Royal Family.

“They are using the titles to gain followers and fame.

“These two are nauseating at best. Go live your private life M and H. We’re so over it.”

Meghan and Harry’s latest controversy comes after the Duke’s request to have a wreath laid at the Cenotaph in London was refused by Buckingham Palace.

It is believed the Queen was unaware of Harry’s request as she was joined by members of the Royal Family for the Remembrance service.

Meghan and Harry’s decision to keep their official titles despite stepping down as senior members of the Firm has been highly controversial.

But despite ongoing calls to have them stripped of their titles, royal biographer Sean Smith claimed Meghan and Harry will never lose them.

He told Express.co.uk: “Harry will remain the Duke of Sussex, I don’t think there is any doubt of that.