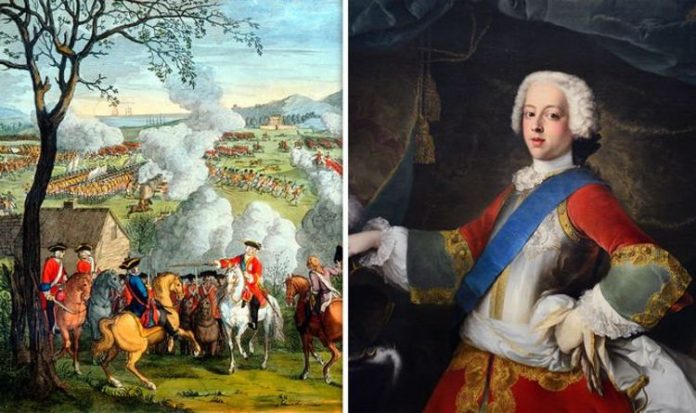 The House of Stuart was dethroned in 1688, as English parliamentarians objected to James II’s catholicism and invited protestant William of Orange to rule as King of England, Scotland and Ireland alongside Queen Mary. The Glorious Revolution, as this came to be known, sparked the Jacobite movement – as those who remained loyal to the Stuarts attempted to reinstate the dynasty they considered the rightful rulers of the realm. Jacobitism, which in many ways became synonymous with catholicism in objection to Church of England doctrine at this time, manifested itself as the movement of opposition to the Royal Family.

The Jacobites tried, and failed, on several occasions to reinstate a Stuart to the throne between 1688 and 1746.

The most serious threat came in 1745, when Bonnie Prince Charlie roused up a Jacobite force to take on George II, of the House of Hanover.

After landing in northern Scotland from mainland Europe, he amassed a force to present a serious threat to the crown and invaded England after taking Edinburgh at the Battle of Prestonpans.

His forces got as far south as Derby before George II’s red coats stopped the advance, sending the Jacobites back north in retreat – teeing up a final stand in the Highlands.

Bonnie Prince Charlie was defeated at the Battle of Culloden in 1745 (Image: GETTY)

It culminated in the Battle of Culloden, the last ever battle to be fought on British soil, where the Hanoverian army – led by George’s son the Duke of Cumberland – defeated Charlie’s Jacobites in less than an hour.

Charlie’s legacy in defeat has been romanticised ever since – not only as a symbol of a bygone age before Britain’s industrialisation but also one of Scottish nationalism.

But many of the myths around Charles Stuart – who died in 1788 and was buried in the Vatican – have been exaggerated over the years.

Professor Murray Pittock – historian and author of ‘Great Battles: Culloden’ – set about debunking some of the most noteworthy.

The Battle of Culloden was the last battle fought on British soil (Image: GETTY)

The first is associated with motive – Charlie’s uprising, Prof Pittock argues, was more a manifestation of opposition to the Union of 1707 than desire to restore a catholic Stuart to the throne.

He points out that no more than 3,000 fought with the Marquis of Montrose in 1649 to restore the Stuart dynasty during the Interregnum.

But after Queen Anne formalised the Acts of Union – and the kingdoms of England and Scotland unified to become the United Kingdom of Great Britain – there was a huge upward shift in Jacobite support due to widespread opposition to the Union in Scotland.

READ  Andrea Coscelli: Ahead of the curve - Bannerman Competition Lecture

The Battle of Culloden (Image: GETTY)

The second myth is the description of Charlie’s forces at Culloden as a “Highland army” as Prof Pittock argues this was an “allusion to the patriotic qualities of northern Scotland rather than a description of the background of its soldiers”.

He then points out that the Jacobite army at Culloden was “drilled using a mixture of French and British tactics” and many of the units were from the Scottish lowlands as well as Irish and Scottish soldiers in the French service, with some English volunteers, while orders were given in English, not Gaelic.

The third myth is that the Battle of Culloden was fought between catholics and protestants.

As Prof Pittock points out, statistically the most likely recruit for the Jacobite army was from the north east of Scotland and an adherent of the Scottish Episcopal Church, which was roughly equivalent to the Church of England.

Most of the Highlanders who fought for the Stuarts were Episcopalian, too. Though there were a number of Catholics, these were a minority of the army, and a small minority once the Scottish and Irish troops in the French service are excluded.

Another myth outlined by Prof Pittock in his piece for BBC History Extra alludes to the idea that the Battle of Culloden was fought to end a British civil war.

He argues that, instead, it should be seen as a conflict in Scotland vs England terms as this is how officers at the time described themselves.

Indeed, the Jacobite army was constructed on the lines of the pre-Union Scottish army and although many Scots fought against the Jacobites, this was equally true in the wars of Wallace and Bruce.

Finally, Prof Pittock notes that Charlie’s defeat was not a defeat for Scottish nationalism because he was not a nationalist in the modern sense.

The Stuarts wanted to be restored to the thrones of England, Scotland and Ireland – ruling from London.

He argues that a Stuart Scotland could have had its own army – but would likely not have room to pursue a separate foreign policy from London, occupying a similar position to Canada and Australia in the 19th century.