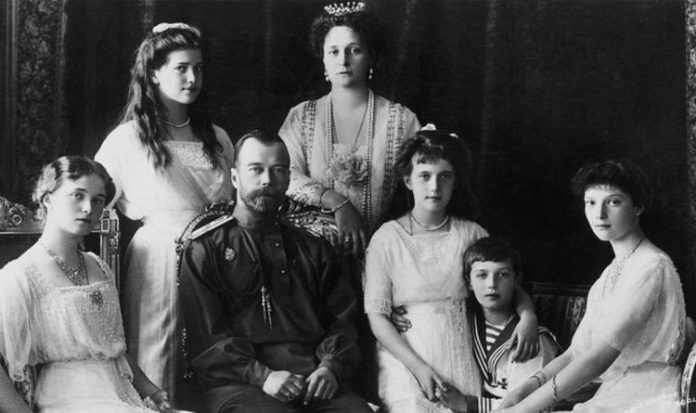 The Romanovs made up the final generation of a dynasty which stretched back 300 years, and ended with the Russian Revolution. The last Tsar, Nicholas II, abdicated in 1917. He, his wife Alexandra, and their five children were then murdered the following year so they would not pose a threat to the growing state. Although their tragic deaths took place more than a century ago, it’s clear there is still a fascination with the Romanovs.

The family has been canonised into saints by the Russian Orthodox Church.

Additionally, a lawmaker from current Russian President, Vladimir Putin, stunned international spheres when he suggested reinstating the Russian royal family to help unify the nation five years ago — implying their existence would not undermine the Kremlin strongman.

Interest in the family also peaked when the Duke of Edinburgh’s connection to them was revealed.

Prince Philip is the grand-nephew of the last Tsarina, and his DNA was used to identify the remains of two of the Romanov children after they had been missing for years.

The Romanov family were the last of the royal Russian dynasty (Image: Getty)

The Romanovs – Nicholas, Alexandra and their children — were murdered by the Bolsheviks (Image: Getty)

He famously once said: “I would like to go to Russia very much — although the b******s murdered half my family.”

The Romanovs’ deaths are often seen as synonymous with the birth of the Soviet Union — but a historian has claimed that, even if the family had survived, they would not have altered the revolution.

Speaking in the October issue of the BBC History Revealed magazine, historian Dr Helen Rappaport explained: “Lenin would not risk allowing the Romanov children to survive because they could at some point become a rallying point for counter-revolution.”

Dr Rappaport continued: “They were murdered. There was no trial, no due process of law, no sentence and no right of appeal.”

It was feared any surviving Romanovs would have been hailed as figureheads within the monarchist movement, but Dr Rappaport said the surviving rescue plans the group had for the royals are “laughable”.

Even then, the monarchist faction in Russia only wanted to get rid of the Bolsheviks, not restore the old, divisive monarchy.

Writer Jonny Wilkes also claimed: “A living Romanov would not have been enough to bring about the return of the monarchy.

“To begin with, Nicholas had no desire whatsoever to be Tsar again, instead wishing for a quiet life with his family.

“There may have been lingering hopes of seeing his son Alexei on a restored throne, but Alexei’s haemophilia had made him extremely ill by 1918.”

Nicholas and Alexandra had only one male heir, whose troubled health had led the Tsarina to lean on the infamous healer Grigori Rasputin — another character who polarised Russians.

Some claim that Alexei’s illness made him so weak it is unlikely he would have lived much longer even if he had escaped the assassination.

Nicholas II was also exhausted by 1918, and so did not fight back as he may have once done when his family were put under house arrest.

Lenin led the Russian Revolution in 1918 (L), and posters of the Tsar were crushed as the monarchy fell (R) (Image: Getty)

Dr Rappaport explained: “By the time the family were taken to Ekaterinburg, they knew there was no way out.”

The Romanovs could not be reached by monarchists or the British forces.

King George V had briefly considered sending a rescue mission to retrieve his cousin but Downing Street blocked his attempts.

Dr Rappaport also dismissed the idea that the Romanovs would have been content with living in exile in the UK for the rest of their lives, as they would have struggled with the humiliation accompanying it.

Prince Philip was related to the Romanovs through his mother, Princess Alice (pictured) (Image: Getty)

The family deeply opposed violence, too, and detested the idea of rescue missions which could hurt others.

Dr Rappaport explained: “The Romanovs had pretty much reconciled themselves to their fate by July 1918 — although not for one moment did Nicholas and his wife Alexandra ever imagine their children would be killed too.”

The Soviets denied the murders until 1926, fuelling rumours that some royals had escaped.

The burial site was discovered in 1979, although the bodies of two of the Romanov children were only revealed in 2007.

You can read the latest issue of BBC History Revealed Magazine by subscribing here.