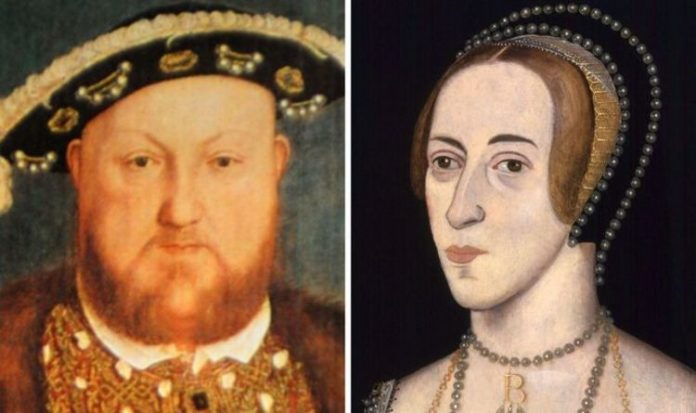 It has long been believed that Anne’s fate was sealed after she was alleged to have been unfaithful to Henry VIII by committing adultery with five other men. Amongst the raft of men she supposedly had relationships with was her brother George, and then the group were all arrested in 1536, with Anne later found guilty of adultery and incest. She was also seen to have committed high treason, allegedly plotting to kill Henry VIII so she could run away with one of her “many lovers”.

Yet, the picture painted by Henry VIII and his courtiers at the time of Anne being this reckless cheat has been denied by historians, who have since reassessed the events which led to her beheading centuries ago.

Tracy Borman, a Tudor historian, argued that Henry VIII had been “paraded as a wronged husband”, to ensure that Anne’s legacy among his kingdom was forever tarnished.

However, she argues that new finds show Henry VIII to “emerge as the villain of the piece”, and that his “cold and clinical” manner around her death exposed his real personality.

The expert, who is joint chief curator for Historic Royal Palaces, said: “Anne was a notorious flirt but it didn’t go beyond that.

Royal history: Anne Boleyn as she prepares to be executed (Image: GETTY)

“There’s absolutely no reliable proof that she had committed adultery.”

Henry VIII is still widely recognised as one of the nation’s most influential monarchs, but his reign was embroiled in controversy.

For example, historians have predicted that under his 36-year-long stewardship around 72,000 people were executed, with many of those deaths as a result of people disagreeing with the monarch.

He also ripped apart the Church of England to ensure he could separate with first wife Catherine of Aragon, in what would be a landmark move in Royal Family history.

He dissolved convents and monasteries, and as a result, was excommunicated from the Catholic church.

And although Catherine was “much loved” among the people of England, Henry VIII did appear to still have feelings for Anne even in the moments before her death.

Archive documents from the time, it appears, shows that Anne should have been “burned at the stake, or hung, drawn and quartered” as a penalty for committing treason.

Yet, Henry was “moved by pity” and opted to instead request an executioner be sent to remove Anne’s head in a bloody ceremony in Greenwich.

Ms Borman added: “Henry sent for a swordsman from France because in England we tended to use the axe and it wasn’t that reliable, taking a few blows. Whereas the sword was much quicker.

“He was cold and clinical about her death, even down to ordering a new suit of clothes for the executioner.”

With Anne’s body barely cold, with some suggestions from the time that a coffin was not arranged as insiders believed Henry VIII would backtrack and imprison his then-wife, the King would marry Jane Seymour – less than 24 hours later.

Ms Borman said that in modern accounts “everyone talks about how obsessed Henry was with Anne”, comparing it to “one big love story”.

She explained that this theory came as Henry VIII was willing to do “everything to marry her, overturning religion, and the establishment”.

Yet, she concluded if everything is taken into account, the “warning signs for Anne” were plain to see.

She added: “She was way ahead of her time and wasn’t prepared to accept women were second class citizens and weaker than men. She was feisty, outspoken and an intellectual powerhouse.

“These were attractive to Henry when she was his mistress but he tired of it when they wed.

“He didn’t want a nagging wife to tell him what to do. People were deeply suspicious of her because women weren’t so forthright. People despised Anne, a ‘concubine’ who had usurped Henry’s first wife, the much-loved Catherine of Aragon.”

Ms Borman told the Independent: “When Anne miscarried the male heir that Henry was desperate for, her fate was sealed.

“As Henry said she ‘didn’t close her eyes as her betters had done’ after discovering he had been unfaithful early in the marriage.

“Anne could be cruel and vicious herself but there was a lot to admire. Even today, she has a massive fan base across the world.”