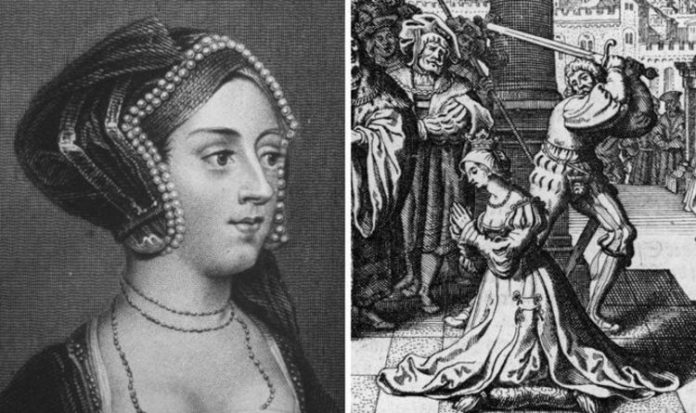 Henry VIII ruled for 36 years during the 16th century, and has become an immortal figure within British history, thanks to his bloody lust to behead his subjects, as well as his long history of marriages. Since his death in 1547, speculation surrounding the inner workings of Henry VIII has been analysed by historians and experts, with many keen to uncover secrets regarding the famed monarch. But one aspect that has often split historians is over whether Henry VIII was truly in love with Anne, who he married after divorcing first wife Catherine of Aragon.

The couple were married between 1533 and 1536, before he accused Anne of having five affairs after she miscarried the boy, and heir, Henry VIII had so craved.

After being found guilty of adultery, as well as high treason for a supposed plot to kill the King, Anne was executed in the Tower of London, just hours before Henry VIII married his third wife Jane Seymour.

Yet, observers suggest that Henry VIII continued to love Anne, the woman he disbanded the Church of England for in order to divorce Catherine.

One way this was displayed, historian Tracy Borman suggested, was that Henry VIII chose to execute Anne, as opposed to burning her at the stake.

Royal myth: Anne Boleyn ‘not given coffin as insiders said execution would not go ahead’ (Image: GETTY)

Burning to death, or being hung, drawn and quartered, was the traditional penalty for anyone found guilty of high treason, so his decision to behead Anne showed he was “moved by pity”, Ms Borman claimed.

She added: “Henry sent for a swordsman from France because in England we tended to use the axe and it wasn’t that reliable, taking a few blows. Whereas the sword was much quicker.

“He was cold and clinical about her death, even down to ordering a new suit of clothes for the executioner.”

JUST IN: Anne Boleyn ‘did NOT have affair’ despite Henry VIII execution

Most astonishingly, though, was the fact that officials were so sure he would not go through with the punishment, that a coffin for Anne was never actually made.

Historyextra.com explained that in the moments after her death, Anne’s remains were “wrapped in white cloth and carried to the nearby Chapel of St Peter ad Vincula”.

It added: “Nobody had thought to provide a coffin for her burial, so a yeoman warder had to fetch an old elm chest, which had once contained bow staves, from the Tower armoury.”

Ms Borman said that in modern accounts “everyone talks about how obsessed Henry was with Anne”, comparing it to “one big love story”.

She explained that this theory came as Henry VIII was willing to do “everything to marry her, overturning religion, and the establishment”.

Yet, she concluded if everything is taken into account, the “warning signs for Anne” were plain to see.

She added: “She was way ahead of her time and wasn’t prepared to accept women were second class citizens and weaker than men. She was feisty, outspoken and an intellectual powerhouse.

“These were attractive to Henry when she was his mistress but he tired of it when they wed.

“He didn’t want a nagging wife to tell him what to do. People were deeply suspicious of her because women weren’t so forthright. People despised Anne, a ‘concubine’ who had usurped Henry’s first wife, the much-loved Catherine of Aragon.”

Ms Borman concluded: “When Anne miscarried the male heir that Henry was desperate for, her fate was sealed.

“As Henry said she ‘didn’t close her eyes as her betters had done’ after discovering he had been unfaithful early in the marriage.

“Anne could be cruel and vicious herself but there was a lot to admire. Even today, she has a massive fan base across the world.”