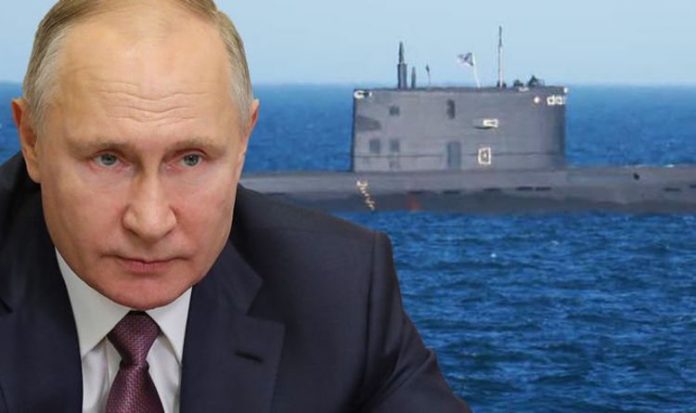 In the latest example of Russian President Vladimir Putin flexing his military might, the Kilo-class diesel powered attack submarine was spotted sailing through wintry seas in the North Sea before passing through the Channel on its journey from the Baltic to the Mediterranean. Royal Navy patrol ship HMS Mersey was tasked with shadowing the vessel.

All of us in Mersey are very proud of the part we play, here in our home waters, in fulfilling the Royal Navy’s role of protecting our nation’s interests

Commanding Officer Lieutenant Commander Will Edwards-Bannon, said: “All of us in Mersey are very proud of the part we play, here in our home waters, in fulfilling the Royal Navy’s role of protecting our nation’s interests.

“No patrol is ever the same as the last and we have conducted a particularly varied range of missions recently, culminating with the tracking of this Russian submarine as it passes the UK.

“You never know what’s around the corner when serving in these ships, but you can always rely on Mersey and her fantastic ship’s company, made-up of both regulars and reservists, to get the job done.”

Vladimir Putin’s Russia has not curbed its activities despite the pandemic (Image: GETTY/Royal Navy)

HMS Mersey with the Russia sub in the background (Image: Royal Navy)

Mersey reported on the movements of the Russian Black Sea Fleet submarine, in order that the UK’s NATO Allies could continue to keep tabs on the vessel’s progress as she continued her onward journey.

Mersey was also on duty when the submarine made the reverse journey in October last year, returning from operations in the Mediterranean back to the Baltic.

The latest operation comes amid a hectic time for the Royal Navy’s patrol ships, with Mersey and her sister ships HMS Tyne and HMS Severn all on maritime security patrols in the seas around the UK.

JUST IN: Back off Brussels! NI Minister HALTS work on checkpoints

Royal Navy patrol ships are involved in a range of missions, including fishery protection, which has been their responsibility for many years, but also coordinating with the Joint Maritime Security Centre to share information relating to suspicious or dangerous activity at sea alongside the Maritime and Coastguard Agency and National Crime Agency.

Sub Lieutenant Andrew Davidson, one of Mersey’s Officers of the Watch, added: “I only joined Mersey last month and she is my first ship as a qualified Bridge watch-keeper.

“I’ve been impressed by the range of missions that we have already been involved with over such a short period of time.

The view from the deck of HMS Mersey – with the submarine in the distance (Image: Royal Navy)

“It feels good to have the opportunity to be out here doing something worthwhile for the UK, especially when you know how much good is being done at home by our NHS, key-workers and all those involved with the Covid-19 vaccine roll-out.”

Despite the ongoing global coronavirus pandemic, Russia’s military operations have continued as normal since the start of 2020.

Last April, Mr Putin sent seven state-of-the-art warships through the English Channel in a deliberate show of force apparently aimed at resting the UK’s ability to respond in the midst of the coronavirus pandemic, naval expert Iain Ballantyne told Express.co.uk.

He added: “Like other nations Russia has triggered a widespread military response to the coronavirus within its own borders while also sending medical specialists from its armed forces to Italy, in order to help battle the virus there.

“However, while NATO – quite sensibly – curtailed or called off some major combat training exercises, the Russian military has made a point during the pandemic of carrying on with business as usual.

“This may merely reflect the fact that they have unity of purpose as a single state, rather than trying to work as part of a multi-national defensive coalition like NATO.

HMS Mersey with the submarine close by (Image: Royal Navy)

“Above and beyond long-planned exercises, there have also been major deployments by Russian Navy units into waters close to the shores of NATO nations.

“These have included sending seven warships – two frigates, three corvettes and two amphibious assault vessels – into the North Sea and through the English Channel.

“This was unprecedented for its size, at least in recent years.”