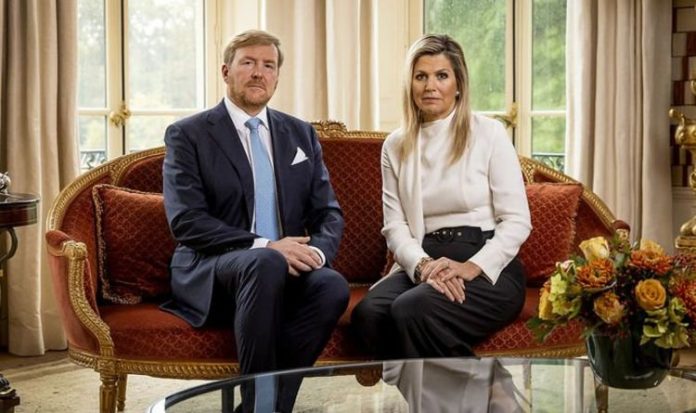 King Willem-Alexander and Queen Maxima sat down on a couch at the royal residence in The Hague, Huis de Bosch, to record a rare apology addressed to the country. Looking saddened by the events that led them to record this video, the monarch spoke about the “unwise” decision his family had taken earlier this month to travel to Greece.

In the two-minute-long video, King Willem-Alexander said: “With regret in my heart I turn to you.

“Our trip to Greece has provoked strong reactions from many Dutch people.

“It hurts to have betrayed your trust in us.

“Even though the trip was in line with the regulations, it was very unwise not to take into account the impact of the new restrictions on our society.

“Our own decision to return was made with the realisation that we should not have gone.

“From the start of the coronavirus crisis, we have done our best to find space – within the limits of the corona policy – and to be there as much as possible for everyone who is looking for support in uncertain times.

“It is a difficult time for everyone.

“A time of lack, limitations and worries.

“From fear, anger and insecurity too.

“We have heard the poignant stories in many encounters, in person and digitally.

“We feel connected with you and with all those people who have been directly or indirectly affected.”

The message ended with the monarch saying royals are not “infallible”.

He said: “We will continue to work with you to get the coronavirus under control.

“So that everyone in our country can then resume normal life as soon as possible.

“That is the most important thing now and we will continue to do so, to the best of our ability.

“We are involved. But not infallible.”

The Netherlands, Mark Rutte, had advised people in the country facing a second wave of coronavirus infection to avoid all but necessary travels.

After the Dutch royals’ trip to Greece came to light, the family issued a brief statement announcing they would leave the country immediately to return home and follow the government guidelines.

Their statement read: “We will abandon our vacation. We have seen people’s reactions to media reports.

“And they are intense, and they have affected us.”

However, the intensity of the backlash grew even further after it was revealed only the monarch, his wife and younger daughter had immediately returned to The Netherlands, leaving behind the heir to the throne, Catharina Amalia, and her sister Princess Alexia.

The palace said the sisters could not get tickets to return to their homeland straight away.

This scandal comes after Mr Rutte agreed on providing “extensive” details regarding the Royal Family’s expenses in the wake of protests from the opposition parties.

A Dutch Labour MP, Attje Kuiken, joked about the eye-watering funds Catharina-Amalia is to receive from next April, upon turning 18.

Calling for more transparency when it comes to hand over taxpayers’ money to royals, Ms Kuiken said: “That is a generous study grant.