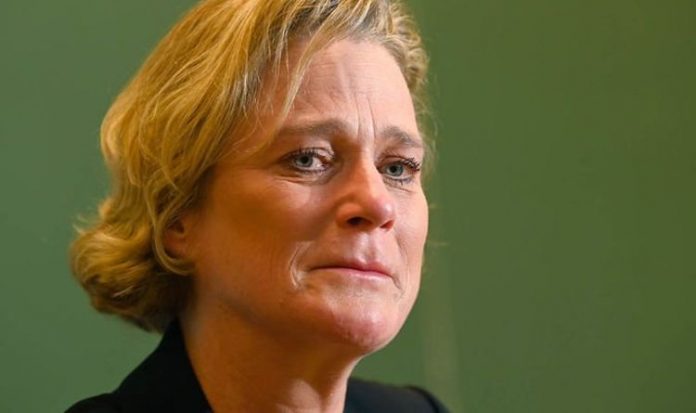 HRH Princess Delphine of Saxe-Coburg said her triumph at the Brussels Court of Appeal makes her feel like she finally has the right to exist. The artist, known until last week as Delphine Boel, expressed her happiness and relief after winning her seven-year-long battle to be officially recognised by her father, former Belgian King Albert II, and treated as an equal to her royal siblings.

Speaking about the court’s ruling, Princess Delphine told Belgian newspaper Le Soir: “The court has agreed with me, the justice system has clearly established that I have the right to be recognised.

“That gives me peace of mind, because it means that I was right and that I have a right to exist.”

Princess Delphine revealed she hasn’t heard from the palace after the ruling and hasn’t been in touch with her father King Albert II since 2001.

She told the press: “I have no expectations in that regard”.

The artist expressed sorrow at the fact she hasn’t been able to settle her case privately and outside of court – despite saying she had tried to.

She said: “I wanted to settle the matter for many years behind closed walls, in secret, but I was the black sheep.

“That was an unpleasant and even unlivable situation.”

Princess Delphine’s struggle to be recognised by her biological father started in 2005, six years after a biography on King Albert II’s wife, Donna Paola, sparked speculation on the monarch’s infidelity and the existence of an illegitimate child.

However, Princess Delphine could only open court proceedings in 2013, when King Albert II abdicated in favour of his firstborn King Philippe – and lost his immunity to legal prosecution.

In her first legal case, Princess Delphine asked for the former king to recognise her.

The former monarch acknowledged Delphine as his fourth child after “learning the results of the DNA tests”.

In September, Delphine launched a new legal case, which she eventually won, to obtain the same privileges, titles and capacities of her half-siblings.

Delphine explained her desire to be treated like her royal sibling after winning the court case saying: “It is not [the child’s] fault, they do not ask to be born.

“The child who comes from a love affair outside of marriage should not be treated any differently.”

Speaking about the relationship with her royal father, Delphine said she isn’t ready to forgive him for denying to acknowledge her existence for decades.

She said: “I need time to let everything heal. It takes time for that.”

Despite becoming a princess – with the right to pass on to her two teenage children the same title and HRH style – Delphine doesn’t have any intention to disrupt the Royal Family.

After having won the right to be acknowledged, Delphine will focus on her art.

She won’t use her HRH style and doesn’t need any of the riches coming with being a royal, the artist revealed.

“He is much richer than the Royal Family.

“I just wanted to be the same as my brother and my sister.”

Delphine’s mother, Sybille de Selys Longchamps, is believed to have had an 18-year-long relationship with the former king.