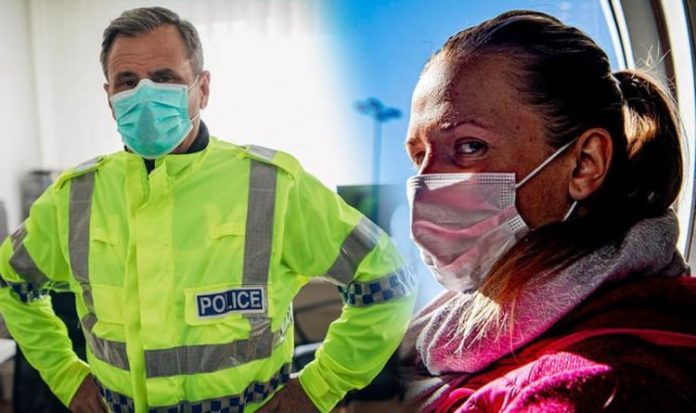 Face masks and coverings help to curb the reproduction rate of coronavirus as they reduce the spread of droplets released from coughs, sneezes and talking. They are mandated in several scenarios where there is a high risk of spreading the virus. When worn appropriately they are confirmed to slow the spread of COVID-19.

What are the rules about face masks in England?

Face coverings across all of the UK must be worn when:

READ MORE: Supernanny Jo Frost responds after being asked to ‘sort out’ Trump

The three police forces which did issue fines prior to this date are the British Transport Police, Lancashire Constabulary and Lincolnshire Police.

BTP had issued 51 fines, Lancashire Constabulary had issued two fines and just one fine had been issued by Lincolnshire Police.

This equates to £300 worth of fines excluding the BTP.

The British Transport Police stopped 50,729 people between June 30 and September 8, 3,545 of which was due to people not wearing face coverings and being asked to leave public transport.

In total, of the 51 fixed penalty notices issued by the BTP, £5,100 was earned from these fines until August 18.

In total, 18,912 Fixed Penalty Notices (FPNs) were recorded in England and Wales under Coronavirus Regulations between Friday, March 27 and Monday, September 21 according to the National Police Chiefs’ Council.

Between June 15 and September 21, the NPCC said 89 fines were issued across England and Wales due to face-covering rules, 61 of which were due to public transport regulations.

This leaves 28 fines which were issued concerning wearing face coverings in a required place such as shops and supermarkets.

National Police Chiefs’ Council Chair, Martin Hewitt said: “Coronavirus is something we have all had to rapidly adapt to, and officers have had to pick up new regulations in a record pace and apply them across the population.

“The number of instances where enforcement action is necessary at all is a fraction of the total engagement we have had with the public.

“Individuals, businesses and a range of agencies all have a responsibility to ensure the virus is suppressed, and police will continue to play their part.”