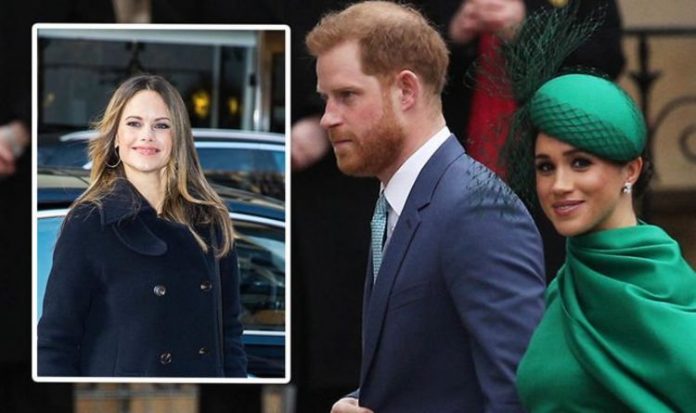 Princess Sofia was left speechless when a reporter bluntly asked her whether she wanted to follow Meghan Markle and Prince Harry’s lead. The uncomfortable conversation took place during an interview in a documentary about her life commissioned by Swedish TV channel TV4.

Despite appearing stunned by the comparison with Meghan and Harry, the princess eventually answered: “No. Not really.

“I think I have found such a fantastic balance, and I really see it as positive that I have made it through these stormy years.

“It is such a huge advantage, in that we have the opportunity to stand a little in both worlds.”

Princess Sofia worked as a glamour model in her early 20s.

Princess Sofia was asked if she intends to ‘do a Megxit’ (Image: GETTY)

In the mid-2000s, the now-royal also took part in a reality show, Paradise Hotel, and even made it to the final.

Sofia moved to New York in 2005 where she studied accounting, specialising in business development.

She has also studied global ethics, child and youth science and children’s communication.

While in the US, Princess Sofia became a certified yoga instructor.

Princess Sofia and Prince Carl Philip on their wedding day in 2015 (Image: GETTY)

Rumours of a relationship between the former model and Prince Carl Philip were confirmed by the Swedish royal palace in July 2010.

Five years later, the pair married and Sofia was given the title of princess.

Her two children, Prince Alexander, Duke of Södermanland and Prince Gabriel, Duke of Dalarna, are respectively fifth and sixth in the line of succession to the Swedish throne.

Princess Sofia, who was interviewed before the coronavirus pandemic swept over the world, didn’t belittle the issues she faced since joining the Royal Family.

Speaking during a private visit to South Africa, the royal said: “Since I became a princess, I have been through many identity crises.

“Here in South Africa I have a type of identity and when I come home I have something else.

Sofia is one of the co-founders and honorary chair of a non-for-profit organisation based in the country, Project Playground, which assists underprivileged children.

During the pandemic, the princess has been working in a hospital to help overworked frontline and medical staff.

Princess Estelle is second in line of succession to the Swedish throne (Image: EXPRESS)

The term ‘Megxit’ was created in January, after Meghan and Prince Harry announced their desire of stepping back as senior royals.

The pair’s initial intentions were to continue to represent the Queen and the Crown through engagements and tours while also be able to pursue profitable ventures.

However, following the summit in Sandringham between Prince Harry, the monarch and her aides, the Sussexes agreed to relinquish the use of their titles and their rights to represent the Crown in order to be able to live abroad and become financially independent.

Meghan, Harry and their son Archie Harrison moved to California in late March, just a few days before they officially stepped down as senior royals.

In July, the couple bought their first home in Santa Barbara, where they can count several A-listers as their neighbours.

Princess Sofia and Carl Philip’s children are fifth and sixth in line to the Swedish throne (Image: GETTY)

According to royal biographer Omid Scobie, the pair didn’t take advantage of Prince Charles’s help but used their own savings to get the house and are paying the rest of their new mansion with a mortgage.

Last week, the pair announced they had struck a deal with streaming platform Netflix, which will help make them more independent from the UK Royal Family.

They said in a joint statement: “Our lives, both independent of each other and as a couple, have allowed us to understand the power of the human spirit: of courage, resilience, and the need for connection.