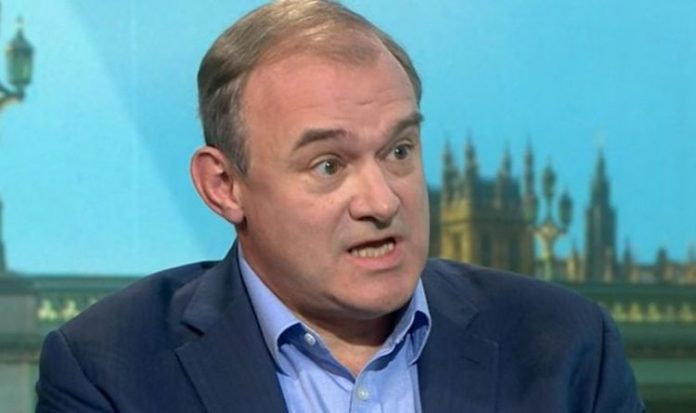 Opposition politicians have erupted into a fury following reports that Government ministers are planning new legislation that could override a key part of the UK and EU’s Withdrawal Agreement. The Government move could change the nature of Northern Ireland customs arrangements, which have also sparked fears that this could lead to a hard Irish border and therefore jeopardise the Good Friday Agreement. The new Liberal Democrat leader, Sir Ed Davey, issued warnings over the Brexit process but was dismissed by BBC Politics Live host Jo Coburn.

Sir Ed said of the reports: “Whether it is theatre or reality, this is damaging.

“Let’s also remember the impact on the Good Friday Agreement.

“Many people have concerns that there could be a hard border between the Republic and Northern Ireland.”

Ms Coburn interjected, saying that the Government had already said that there won’t be a hard border because the issue is about customs checks.

The Lib Dem leader shot back: “I’m afraid that ministers can say that but all the other people, whether they’re Northern Ireland politicians, politicians of the Republic or indeed Brussels, they are all warning about this.

“I’m afraid that the British Government looks like its reneging on a promise.

“A promise to the British people as well as to our European colleagues.”

There is a separate negotiation going on from the future relationship talks between Michael Gove and one of the Vice-Presidents of the European Commission.

This is over the implementation of the Northern Ireland-Ireland protocol in the Brexit deal.

It is all about the level of checks on goods going from Great Britain to Northern Ireland.

The principles are in the Withdrawal Agreement treaty but the details are still to be worked out.

The UK Government reportedly plans to propose some legislation this week for the UK internal market.