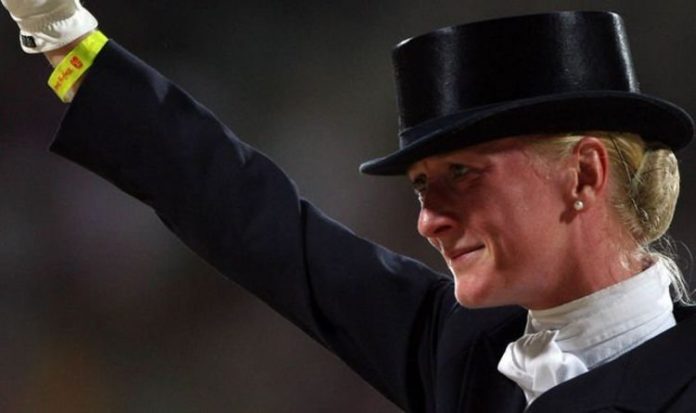 Princess Nathalie of Sayn-Wittgenstein-Berleburg, the niece of Denmark’s Queen Margrethe II, announced she had to say goodbye to her beloved horse, Digby. The horse, with which she competed and won at the 2008 Olympic Games in Beijing, died on Saturday at Berleburg Castle.

In a statement to Danish horse-focused website Ridehesten, the princess said: “It was not an easy decision, but the vet praised me for making the most sensible decision for Digby.

“It is an era that is over; it is weird.

“A lot has happened in the 23 years with Digby in my life.

“We did an X-rays of him, and it was just the second time in his life he was X-rayed, and the vet was very surprised.

“The vet had never seen such beautiful X-rays on a 23-year-old horse.”

According to the 45-year-old princess, her horse had never been sick before.

Princess Nathalie, who started her equestrian career in 1994, and Digby won together the bronze medal for team dressage at the Olympics in China.

Before Digby, Nathalie also won the bronze medal at the European Championship with the Danish team before moving to England.

In 2000, the royal returned to her home country to join the Olympic team.

Her passion for horse-riding was further cemented in 2010, when she announced her engagement to German horse breeder Alexander Johannsmann.

The couple have two children, Konstantin and Louisa, who don’t have any royal title.

Princess Nathalie, who is also the niece of Queen Anne-Marie of Greece, is the daughter of the 80-year-old Danish monarch’s only sister, Princess Benedikte.

The Queen’s sister was recently in the news after joining Margrethe at the opening ceremony of the Danish Parliament.

While all the royals abided by the country’s social distancing rules, the monarch was caught blowing a kiss to her sister rather than hugging her as she would have normally done.

The love for horses is common among royal households across Europe.

Much like the Danish princess, Queen Elizabeth II is known for her love for horses and has mourned the death of several beloved animals over the decades.

In January 2019, it was announced that PH Keston, who escorted the Queen on many carriage journeys throughout its life, had died.

The white horse, known as a “crowd pleaser” died only three months after the Queen’s last beloved corgi.

PH Keston’s passing was announced by the Metropolitan Police Task Force on Twitter, saying: “It’s with the greatest of sadness to announce that PH Keston has passed away.

“He was a real crowd pleaser with people around London.

“Thank you for your service, Keston. RIP.”

The Queen’s love for horses has been immortalised by sculptor Robert Rattray, who recently created a life-sized bronze statue of two of the Queen’s horses.

Unveiled by the monarch herself in 2014, the statue depicts Daniel and Storm, two horses stabled at the Royal Mews who have been regularly used to draw the monarch’s carriage during key outings including Royal Ascot and Trooping the Colour.

The statue is located along The Long Walk in Windsor.