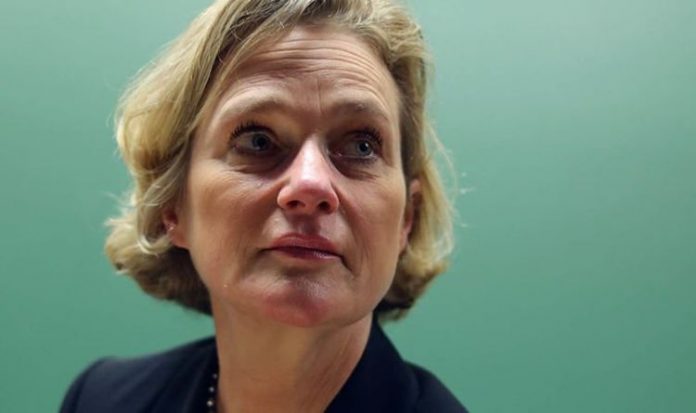 Belgium’s former monarch King Albert II broke the silence for the first time since artist Delphine Boel was granted by a Belgian court a hereditary royal title. The former king spoke in the wake of the poignant meeting between Delphine, now known as HRH Princess Delphine of Saxe-Coburg, and her half-brother and current King of Belgium Philippe.

“My wife and myself are delighted with the King’s initiative, the beginning of better times for all of us and especially for Delphine.”

King Philippe, who ascended to the throne in 2013, publicly showed unity and support to Delphine on October 9, when the pair had a “warm meeting”, according to the Royal Palace.

A statement issued last week by the monarch’s press office read: “A joint message from His Majesty the King and Her Royal Highness Princess Delphine: On Friday the 9th of October, we met for the first time in the Palace of Laeken.

According to Princess Delphine, King Albert II has not been in direct contact with his daughter since 2001.

The former monarch publicly acknowledged Delphine was his fourth child in January 2020.

However, he had initially refused to undergo the DNA test which eventually proved Delphine was a love-child born from an 18-year-long affair with Baroness Sybille de Selys Longchamps.

A few years earlier, an unauthorised biography on the monarch’s wife, Queen Paola, had sensationally claimed the King had had an extramarital relationship during which a child was born.

The first battle started in 2013, after Albert lost immunity from legal proceeding by stepping down as King, and ended after seven years with the recognition of the royal as Delphine’s biological father.

The second legal case lasted only a few weeks and saw the court granting Delphine all the rights, royal titles and privileges his siblings also have.

Explaining the real reason behind her second court battle, Delphine added: “It is not [the child’s] fault, they do not ask to be born.

“The child who comes from a love affair outside of marriage should not be treated any differently.”

Speaking about how important the latest court’s decision has been for her, Delphine said in early October: “The court has agreed with me, the justice system has clearly established that I have the right to be recognised.

“That gives me peace of mind because it means that I was right and that I have a right to exist.”

The Princess also revealed she had tried to settle her case privately before launching her legal battles.

She said: “I wanted to settle the matter for many years behind closed walls, in secret, but I was the black sheep.

“That was an unpleasant and even unlivable situation.”

Speaking about the relationship with her royal father, Delphine said she

isn’t ready to forgive him for denying to acknowledge her existence for decades.

She said: “I need time to let everything heal. It takes time for that.”